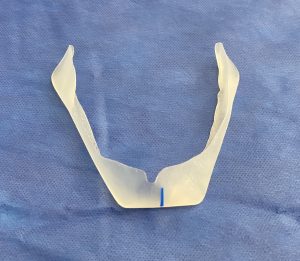 The custom jawline implant for many men provides the definitive lower third of the face enhancement. While in the leaner male patient with good cheeks the jaw augmentation alone may be sufficient for creating more defined facial features. But in the fuller or rounder faced patient this alone may not be enough.

The round face typically has a fuller midface (cheeks) and a smaller jawline. While a custom jawline implant helps one of the problems its effects may not be fully seen because of the fuller cheeks tissues above it. The only way to treat fuller cheeks is through a limited number of defatting procedures which are often performed at the same time as the jaw augmentation. 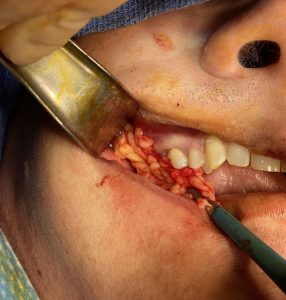 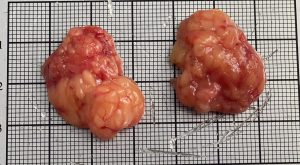 The only two cheek defatting options that exist are buccal lipectomies and perioral liposuction. The most well known of the two are buccal lipectomies…which as the name indicates is an actual excision or en bloc removal of a encapsulated fat mass in the cheeks. Located under the cheekbone it is removed through a small intraoral incision in the upper vestibule. Once the capsule is opened the large lobulated fat mass is teased out and its vascular pedicle cauterized. 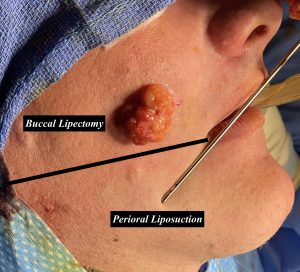 While buccal lipectomies can reduce cheek fullness its effects do not extend down through the full extent of the cheeks. Its effects basically stop at a horizontal line drawn between the corner of the mouth and the tragus of the ear. Below this line reduction of fat is done at the subcutaneous level using small cannulas and is known as perioral liposuction. Such facial liposuction was done originally for small perioral mounds but can be done over a larger area just as effectively.

Many custom jawline implant patients do get buccal lipectomies and perioral liposuction in an effort to reshape their faces by achieving a greater bony convexity along the jawline and the hopeful creation of any cheek concavity above it. The implant will have a far greater effect than the cheek defatting. How effective the cheek defatting is varies amongst patients based on their tissue thickness. All of the fat in the cheeks can’t be removed (nor should it be even if possible) but these two procedures are the cheek defatting techniques that can be done.