The option to get rid of some abdominal and waistline fat without surgery has been a major non-invasive body approach for almost two decades. Numerous devices, injections and technologies have been introduced over the years…a few of which have stayed and most of which have gone. As old ones go, new non-surgical fat reduction methods appear which are usually better than those tried before. Although none of them can be compared in terms of results to actual fat removal surgery. 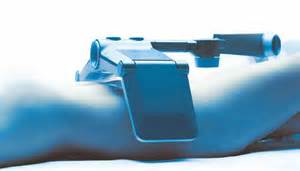 Thus enters Vanquish whose names sounds exactly like what it is trying to accomplish…vanquish your fat. Vanquish is a relatively new radiofrequency treatment that targets fat through an external delivery system of paddles. The external paddles create a broad radiofrequency field that is targeted to the fat under the skin. It heats up the fat to around 46 degrees C while keeping the overlying skin and deeper muscle at temperatures no higher than 41 degrees C.  At 45 to 46 degrees C, fat cells will undergo apoptosis or cell death. This causes the cells to shrink and lose their lipid content, resulting in a change of the outward body contour. 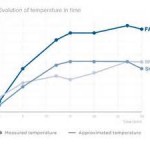 How does this radiofrequency approach actually work? In scientific terms, the creation of a high-frequency electrical field allows the transformation of electromagnetic energy in the treated body part to be converted into heat. This works best in tissues, like fat, which have a relatively low flow blood circulation. (so that the heat is not quickly wisked away so a temperature increase can actually occur) Due to the polar molecule oscillation resulting in the treated tissue, the temperature rises in the fat while the surroundiung tissues above and below it remain protected from the high heat. In essence Vanquish is a thermal method of fat reduction. The manufacturere likes to use the term ‘zapping the fat’ but this is not really how it works. (it is not a laser that shoots the fat cells) 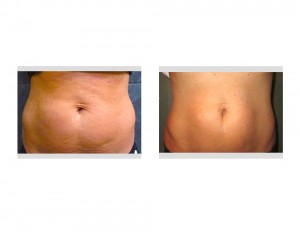 While Vanquish with its radiofrequency and heat generation sounds uncomfortable, it is not. Treatments are pain-free and have very few side effects. Most people say that their treatments feel like a moderately warm ‘heat treatment’ on their abdomen. The skin will appear red or flushed for an hour or two following treatment as one might expect from any treatment that induces heat. (remember that fat acts just like oil so it retains its heat for some time after the temperature induction has occurred) To help wash out the loose fat oils (lipids) after treatment, it is beneficial to stay well hydrated immediately before and following a Vanquish treatment. 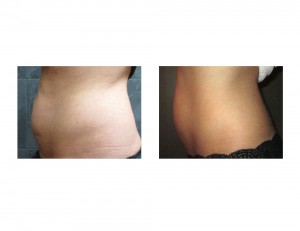 Each treatment session is about 30 min long and requires four to six sessions to get the maximal effect. Many patients report they notice a visible difference after the first treatment but, after the fourth, the average was at least a two-inch waist reduction. Early research indicates that there have been no problems of nerve pain and no damage to the top and middle layers of the skin, muscles or hair follicles. Because of its paddle delivery system, Vanquish is only intended for treatments on the back, love handles and stomach.

Vanquish requires the placement of a grounding pad due to the creation of a radiofrequency field. As a result, there are certain conditions that are contraindications for Vanquish treatments, such as people with metal implants, pacemakers, women who are pregnant or breastfeeding, and people with non-healing wounds.

It is important to understand that Vanquish does not create the same fat reduction effects as liposuction or tummy tuck surgery…no non-surgical treatment approach can. Therefore, it is important to be qualified beforehand for Vanquish to determine if it or surgery is more appropriate.