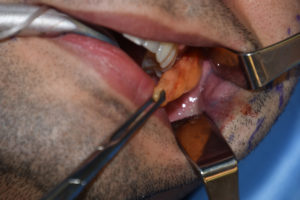 Buccal lipectomies have been recognized as an effective technique for providing midface/cheek slimming effects. The scarless intraoral removal technique and the visibly sizable fat that comes out make it the most effective fat removal procedure per surface area of the face. The one concern that is always posed for the buccal lipectomy patient is the potential for a long-term adverse effect of creating a gaunt midface or lack of adequate facial fat under the cheekbones. (facial lipoatrophy) No guidelines exists for whom is a good candidate for the procedure and on who should it not be performed.

In the Advance Article section of the August 2018 issue of the Aesthetic Surgery Journal an article was published entitled ‘The Excision of the Buccal Fat Pad for Cheek Refinement: Volumetric Considerations’. In this paper the authors compared before and six month after surgery volumes of the buccal fat pad by ultrasound assessment. Before surgery imaging showed that the fat pad volumes were in the range of 12mLs. (+/1 1.5 mLs) After surgery the mean postoperative fat pad volume was 8.5 mLs (+/- 1.0 mL). The mean volume of the excised buccal fat pad was roughly 2.5 mLs. (+/- 0.75 mL) 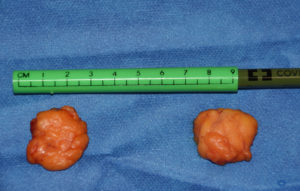 In this paper the authors attempt to determine whom would be a good candidate for the buccal lipectomy procedure. Based on their volumetric data thus would suggest that anyone with volumes north of 10 mLs would be a satisfactory candidate with a  low risk of a long-term facial lipoatrophy effect. This would, of course, require a preoperative ultrasound study to make that determination. With a typical volume of 3 mLs of buccal fat removed this would indicate that a subtotal buccal lipectomy is being performed. This speaks to both the size of the buccal fat pad (and is various finger-like extensions) but also to that which was removed was just the amount of  fat that easily protrudes once its capsule is opened and the fat expressed.

Since most patients are not going to undergo a preoperative ultrasound imaging analysis, it would be more practical at facial types. The fuller or rounder the face would seem to be a good candidate since they are not genetically prone to developing facial lipoatrophy with aging. The thinner type face would seem to be the one in which to be more cautious, although it is not rare to see a young patient with a thinner face that seeks the procedure to accentuate their cheekbones. 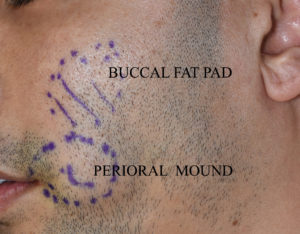 Besides its potential long-term effects from further fat loss due to aging, a much more common buccal lipectomy problem is a misconception of the part of the cheeks that it affects. This is misunderstood by many patients and even some surgeons. The buccal lipectomy affects the submalar region right under the cheekbone and does not extend all the way down to the lower cheek area by the side of the mouth. Fullness by the side of the mouth, short of rare buccal fat prolapse, is caused by the subcutaneous fat layer known as the perioral mounds which can only be reduced by microcannula liposuction.  The combination of a buccal lipectomy and perioral mound liposuction is the complete approach to midface slimming.