Background:  Aesthetic skull reshaping surgery is done for a wide variety of head shape concerns. Augmentation represents half of the potential skull reshaping procedures for flat areas, asymmetries and overall head size increase. While skull augmentations are done for both males and females, and could be requested for the same reason in either gender, there are specific gender procedural preferences.

In females the most common type of skull augmentation is for the crown area. At the intersection of the top and back of the head a high crown is often aesthetically desired by some women. When its height is less than desired women often arrange their hair so it add volume to this area. There are even plastic devices commercially available to place under the hair to create the appearance of a higher crown. The aesthetic value of a high crown of the skull in women is not clear. Given that a crown is a symbolic form of headwear worn by royalty one wonders if there is some desired connection to this head shape appearance.

Many women that present for crown of the head augmentation do have flatter crown skull areas as seen on their 3D CT scan. Such a scan can be used to determine how much skull augmentation in this area the patient prefers. By drawing increased contour shapes in profile on the scan it can be estimated whether a one stage or a two stage skull augmentation approach is needed. Computer imaging is also useful in this regard but must be done with the patient having wet hair with it combed flat to get a closer estimate of the actual head shape. 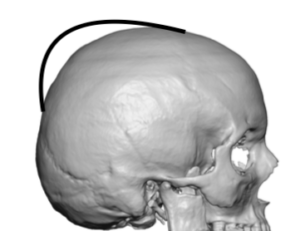 Case Study: This middle-aged female had long desired higher crown height and had the classic history of teasing her hair up to create this effect. Based on computer imaging and in looking at her 3D CT scan, it was determined that a two stage skull augmentation was needed.

A first stage scalp tissue expander was inserted which was inflated to 150ccs over the next six weeks in preparation for the second stage custom skull implant placement.

In the interim the custom skull implant was designed with an implant outline that covered well beyond the specific crown area to avoid creating an unnatural ‘bump’ effect. It maximum projection at the crown area  was 15mms with an overall implant volume of 175ccs.

Under general anesthesia and in the prone position, the healing of the scalp incision use to place the tissue expander could be seen to have healed well with good follicular preservation. The same

incision was opened and the tissue expander  removed. The part of the capsule on the bone was removed and the entire perimeter of the capsule released to ensure the edges of the custom skull implant would lay flat. The implant was opened and its internal wedge design revealed which helps its insertion. Multiple perfusion holes were placed prior to insertion. Once inserted and positioned two small screws were used to ensure its position.

On examining the perimeter of the implant after incision closure it was discovered there was an anterior edge that was not laying down properly. A small incision was made at the implant edge and the capsule fully released to ensure the implant was laying completely flat as designed. 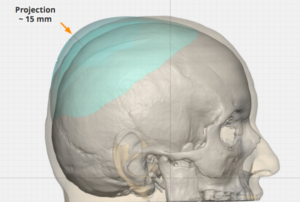 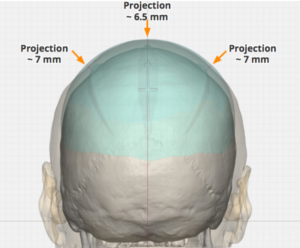 To get maximal crown height a two stage approach is needed. While the tissue expander provides the needed pocket and scalp stretch, it also creates an enveloping capsule which can prevent the implant from laying flat. This must always be released in a circumferential manner. Checking the implant edges externally by palpation can reveal if there is an implant buckle due to an incomplete capsulotomy. This is most likely to occur at the anterior edge of the implant which is the furthest from the incision and hard to reach due to the convexity of the skull. A small incision at this edge can provide for release of any remaining capsular restrictions.

1) The most request for female skull augmentation is that of the crown of the head.

2) The most ideal or maximum amount of female crown augmentation usually requires a two stage approach to get implant volumes of 150cc to 200ccs.

3) Insertion of the custom skull implant after tissue expander requires partial capsulectomies and releasing capsulotomies around the perimeter.