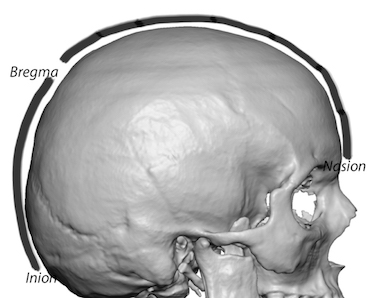 In the well known architectural principle ‘form follows function’ the shape of a building should relate to its intended purpose. This equally applies to anatomy where the form of a body part relates to its function. The skull is a great example of this principle as its size and shape has evolved to accommodate the brain within and its multiple sensory organs. But does the shape of the human skull reflect more…and does it also have a mathematical basis for what makes a better looking skull shape?

The Golden ratio, and its number 1.618,  is well known and has been demonstrated in many mathematical, architectural, artistic and biologic examples. Its appeal and the belief that many or all life forms are built around this mathematical principle is irresistible and appeals to our basic nature to find a rationale basis for beauty in nature. While the Golden ratio has been extensively applied to the face, it has been less so to the head and specifically that of the skull. 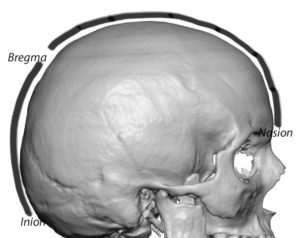 In the September 2019 issue of the Journal of Craniofacial Surgery an article was published entitled ‘Mammalian Skull Dimensions and the Golden Ratio’. In evaluating the numerical shape of the skull the authors evaluated the neurocranium along the midline calvarial perimeter using the nasioiniac arc and its two sub-arcs as divided by the bregma. In theory the subdivision of the nasioiniac arc by bregma into 2 unequal arcs is analogous to the geometrical division of a line into the Golden Ratio. They studied 100 human skulls and 70 skulls of 6 other mammalian species and calculated 2 ratios: 1) the nasioiniac arc divided by the parieto-occipital arc (between bregma and inion), and 2) the parieto-occipital arc divided by the frontal arc (between nasion and bregma).

The authors report that in humans these 2 ratios coincide (1.64 ± 0.04 and 1.57 ± 0.10) and approximate ?. In the other 6 mammalian species, these 2 ratios were not only different, but also unique to each species. The difference between the ratios showed a trend toward convergence on ? correlating with species complexity.

Their findings in humans is that the ratio of the nasioiniac arc over the parieto-occipital arc as well as that of the parieto-occipital arc over the frontal arc approximately coincide at 1.6.(1.64 and 1.57) In addition humans have the smallest difference between the 2 measured cranial ratios of the 7 species studied. In the other 6 mammalian species the two ratios were different as well as species specific. The observation was that as the species became more complex the closer the profile shape and arc ratios of the skull became closer to the Golden Ratio.

The relevance of this study in my work is whether there is some mathematical basis for creating an improved skull shape. In skull augmentation surgery the contours of the skull are expanded and often made more rounder or the convexity increased. While the profile and the nasioiniac arc of the skull are just one dimension of its shape, perhaps there is some value in it in custom skull implant designs.