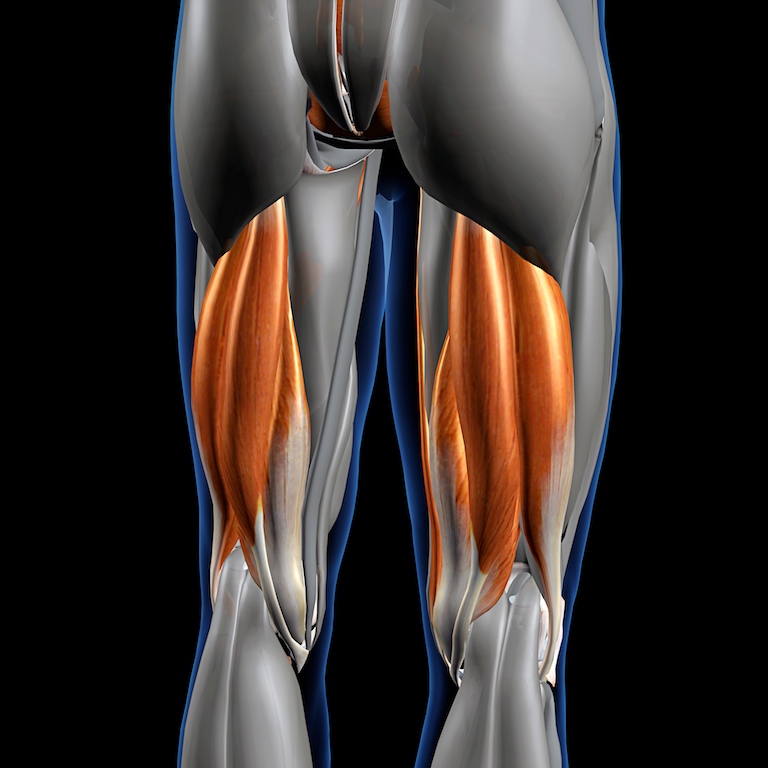 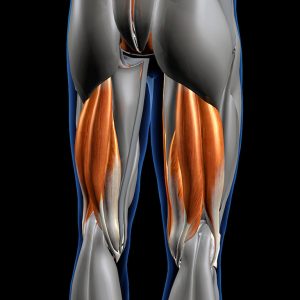 The posterior thigh is composed of three specific muscles, the biceps femoris, the semitendinous and the semimembranous, which lie between the hip and the knee  Some refer to it as having four muscles, making a distinction between the short and long head of the biceps femoris. But what they all share in common are the following characteristics; 1) they originate from the ischial tuberosity, 2)  they insert around the knee into either the fibula or the tibia, 3) they are innervated on their inferior surface by tibial branches of the sciatic nerve, and 4) their action is to flex the knee and extend the hip joint.

In looking at these three hamstring muscles they are all longitudinal in shape and theoretically any of them could be augmented. The biceps femoris muscle is generally shown to be bigger in size in most anatomic illustrations and appears to have muscle fibers than run more up and down, which is always the most favorable for developing a smooth and confluent subfascial pocket for an implant. It is also located laterally where it is the most visible. When looking at bodybuilders, however, the biceps femoris and the semitendinous muscle appear joined behind their tendinous insertions. This raises the question of whether the two muscles cold be concurrently augmented. The nmluy caveat to that possibility is that the semitendinous muscle is divided into two sections by a visible ridge of tendinous tissue (raphe) which can be problematic for making a smooth confluent subfascial implant pocket.

Therefore, for the posterior thigh the biceps femoris appears to be the best candidate for implant augmentation. While it has two heads, the long head is considered the most significant and some people are even missing the short head. The direction of dissection and implant placement would be from inferior to superior as the subcutaneous tissue is thinner in this area of the back of the leg. The largest and widest part of the muscle is in the central posterior thigh area. This is also a better place for incisional healing. While it is tempting to place the location of the incision in the popliteal fossa (back of knee skin crease) the part of the biceps femoris that traverses around the lateral aspect of the knee is largely tendinous. As a result the incision should be above the popliteal fossa, in the range of 4 to 5 cms above, based on preoperative assessment of muscle flexion.

The biceps femoris implant would parallel the shape of the muscle being long and thin. Its length would be based on the height of the person and the vertical length of their posterior thigh. But generally an implant in the range of 25 to 27cms would be adequate. Its width would be in the 5 to 7 cms range with a maximum projection of 2 to 3cms which is greatest at its central location. From the central projection towards all edges of the implant it would be tapered.