Background: The shape of the skull in men has taken on greater aesthetic significance today due to changing hair styles. Close cropped hair styles and total head shaving due to hair loss creates an exposed appearance to the shape of the head. Having a ‘nicely rounded head’ is a desirable physical feature although what that constitutes exactly defies an exact measurement and will vary based on aesthetic tastes.

While the head is seen from various angles the most visible is that of the front view, which is what the patient sees the most. From this view the shape of the head should have a certain convexity with the apex being the midline sagittal ridge. If the part of the head besides the sagittal ridge is too low (bilateral parasagittal regions) the head will have an undesired slope from the midline. This is known as the inverted V head shape deformity. (technically an inverted U shape deformity)

A custom skull implant is the ideal approach to changing the inverted V deformity head shape. But to do so the scalp must be able to be adequately expanded to accomodate the implant volume. This depends on the skull implant and the amount of natural scalp stretch that exists. 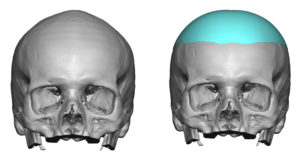 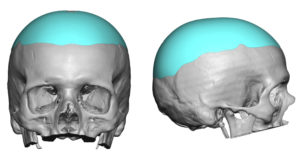 Case Study: This young man was bothered by the shape of his head which had a lack of adequate convex shape. The lack of parasagittal height on both sides created a form of inverted V deformity. The plan for correction was a custom skull implant which was initially designed like a cap on top of the head. The thinnest part was over the sagittal ridge with a thicker parasagittal region that blended into upper temporal areas. 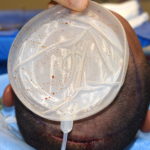 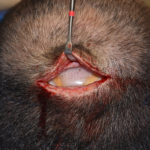 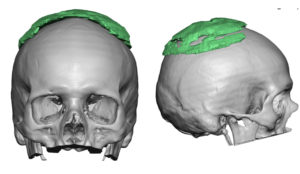 Because of the volume of the skull implant there was some concern about the ability of the scalp to stretch.  A first stage procedure done that consisted of the placement of a scalp tissue expander which was filled to 100ccs and the port tied off. (static scalp tissue expansion) 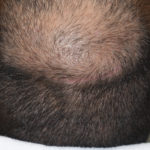 In a second stage procedure 6 weeks later, the tissue expander was removed and replaced with the custom skull implant though the same small scalp incision.

The immediate skull implant effect shows the desired head shape change that was predicted by the implant design on the bone. The use of a static form of scalp expansion (placing a tissue expander with immediate fill) provided the needed scalp tissue needed to comfortably place the custom skull implant.

1) Lack of a normal convexity to the top of the skull can be an aesthetic disturbance.

2) Changing the shape of the top of the head can be done by a custom skull implant.

3) When the scalp stretch is marginally inadequate to accommodate a skull implant, a static scalp tissue expander is used.