Background:The forehead occupies the upper third of the face and has variable degrees of convexity based on gender and genetics. It is structurally composed of very strong bicortical bone at its upper two-thirds and the much weaker aerated brow bones at its lower third underneath the eyebrows. While the forehead can resist significant forces, up to more than 100kgs of impact, it can be fractured and displaced. The brow bones, however, fracture at much lower impact forces.

Because it takes such a tremendous force to fracture the frontal bone, most such injuries also cause brain trauma and frequently need neurosurgical intervention. Often a craniotomy is done and the forehead bone is reconstructed at that time. But some cases do not involve the need for neurosurgery and the forehead defect is lefted untreated. These forehead contour defects are then reconstructed secondarily. 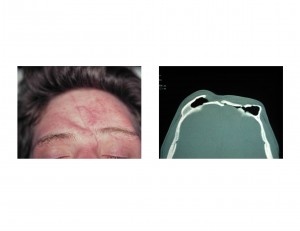 Case Study: This is a 37 year-old male who sustained significant forehead trauma and fractures from a fall from a scaffolding at his work one year previously. He recovered from his head trauma and had fullneurological recovery. He had a large indent in his forehead and a well-healed vertical laceration that extended from his hairline down to his eyebrow. A CT scan shows the degree of outer cortical table impaction from his frontal sinus upward. 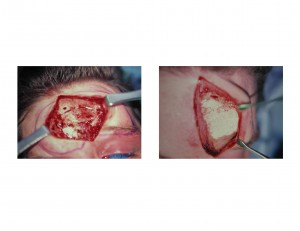 An open cranioplasty was performed by re-opening his healed laceration. Through this approach the forehead tissues could be lifted back onto the normal undepressed contours of the bone in a circumferential manner. The infractured bone was largely healed and there was no communication into the frontal sinus cavity. An hydroxyapatite paste was prepared, packed into the defect and made smooth with the surrounding bone. In less than 10 minutes, the hydroxyapatite paste hardened and the incision closed. 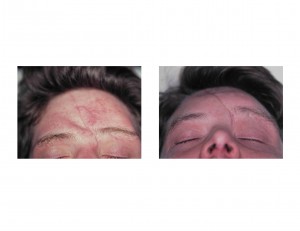 He had complete restoration of his forehead contour and its convexity and his incision healed without problems. This procedure was done as an outpatient and completed in less than 90 minutes. His postoperative pain and forehead swelling was minimal.

The hydroxyapatite cranioplasty concept is now about 15 years old in its clinical use. It offers an advantage over old-style PMMA (acrylic) in that the material is more biocompatible and actually integrates into the tissues. It is more expensive than PMMA and is far less impact/fracture resistant.But I have never yet seen that be a secondary cranioplasty problem. Due to the handling of the material it must be placed through an open approach. In some cases, small incisional access can be used to place the material.

1) Forehead defects from trauma involve changes in the contour of either the solid portion of the forehead and/or the more fragile brow bones.

2) Contour reconstruction of the depressed forehead can be done with the onlay cranioplasty material, hydroxyapatite, in an open technique.

3) Frontal cranioplasty can be done through either a coronal (scalp) incision or an existing forehead laceration if it is big enough.