Background: In an era where it is common to see an adult male with a shaved head or a very closely cropped haircut, the shape of the head takes on great aesthetic significance. Not only are large head shape issues glaringly apparent but small ones that would normally never be seen with a head of hair also become more obvious. As a result I am seeing more and more men with both large and much more modest skull contour issues.

While the skull is generally perceived as having a smooth surface and an oblong shape, it is prone to many irregularities given the complexity of its development. Being created by the union of numerous bone plates and suture lines there is ample opportunity for less than a perfectly smooth skull surface to occur.

High or low skull areas can develop which are obviously treated differently. While high skull areas need to be reduced, low ones need to be filled in or built up. Augmenting smaller depressed skull areas can be done with a variety of methods from injectable fat grafting to more reliable implant material placements. The materials that I have successfully used for smaller aesthetic skull contour issues are either bone cements, ePTFE sheeting and preform or custom silicone implants. Each augmentation method has their merits and can be successful in the properly selected patient. 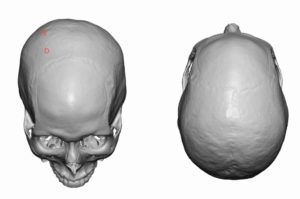 Case Study: This adult male was bothered by a raised right parietal skull area combined with a depression in front of it. This was visible externally as well as on his 3D skull CT scan. (R = raised area, D = depressed area) 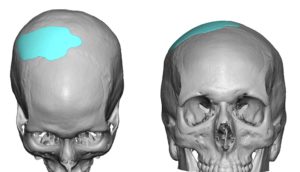 While the round skull prominence was to be burred down, it was elected to design and place a small custom skull implant for the area of skull depression. Given that the incision to do the bone burring would be just posterior to the prominence it it was felt that only a custom implant could be placed in a reliable manner from a more posterior and distant incisional access. 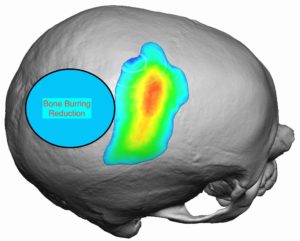 From a 5 cm long scalp incision placed behind the prominent skull area, a 3mm bone reduction was done by burring and the skull implant placed anterior to it were successfully preformed. To prevent any risk of the skull implant from shifting or rotating a single microscrew was placed in a percutaneous fashion through the poster edge of the implant. This point of fixation combined with the placement of multiple perfusion holes should ensure its long term positioning stability.

1) A custom skull implant can be designed for very small contour defects.

2) While it is tempting to treat a small head shape depression with an off-the-shelf implant or cement solution, this has a high risk of to adequately solving the problem.

3) Having a preformed precisely made implant allows it to be placed from a remote incision without worrying about its shape once positioned.