There are numerous reasons patients seek calf augmentation. The desire for a more muscular calf appearance in an otherwise normal but thin calf and improvement in congenital or traumatic calf asymmetry are the most common patients that seek calf augmentation. The only assured method to achieve such calf size improvements is with the use of an implant.

Calf implants are composed of a solid soft silicone material that is designed to feel like muscle. They look like variations of a cylindrical shape with various styles and sizes, all of which are longer than they are wide. It is their elongated shape and material compressibility that enables their insertion though small skin incisions. 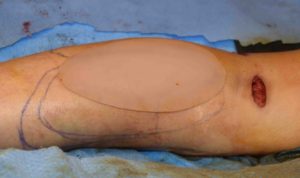 The skin incisions used for calf implants are placed behind the knee in a popliteal skin crease. There is no other incisional locations to use. Each head of the muscle (inner and outer muscle bellies) requires a separate incision and implant.

It is important to recognize that the location of the incision is actually far above the upper portion of the calf muscle/fascia. The fascia that is initially encountered deep to the incision is the semitendinous and semimembranous muscle and ligament insertions. It is below these structures that lies the upper end of the gastrocnemius muscle onto which the implants are placed under its fascial cover.

It is also important to be aware that the sural nerve runs between the two heads of the calf muscles in the intermuscular septum. This is another reason to use two separate popliteal skin incisions to augment both muscles. Trying to place bilateral implants through a single central skin incision runs a higher risk of nerve injury.

Popliteal skin incisions generally heal well and are of lengths of around 3 cms. In patients with more skin pigment there is usually a temporary pigmented response in the surrounding skin.