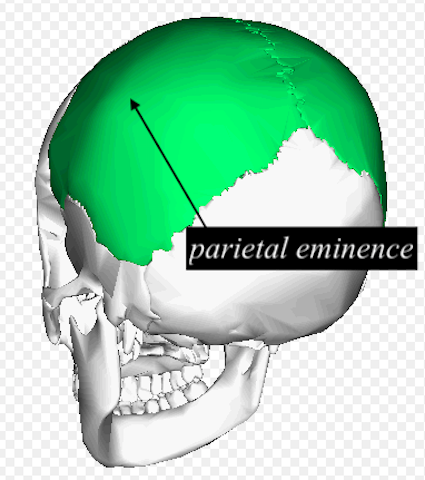 Reduction of various skull areas can be done throughout the entire external cranial surface. Almost always these are on naturally flatter or curved areas that are seen as too convex or prominent. This can be due to overgrowth in one specific area (e.g., sagittal crest or occipital knob) or of an entire cranial surface. (e.g., occipital protruberance)

One such skull reduction area is that of the parietal eminence. The parietal bones are paired large bones of the skull which create much of the sides and top of the skull. Being quadralateral in shape they have four borders with other skull bones and four angles within them. But the most common area of prominence is that of its eminence area which does not correspond to either a border or an angle. 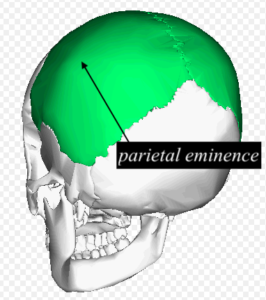 The parietal bone begins ossification at the eminence area at around eight weeks in utero. The ossification pattern occurs in a radial fashion from the eminence. In some people the parietal eminence may remain more exaggerated than others, creating an undesired aesthetic prominence seen in both frontal and oblique views. It can also develop more prominence the flatter the back of the parietal bone becomes creating a fifth angle. 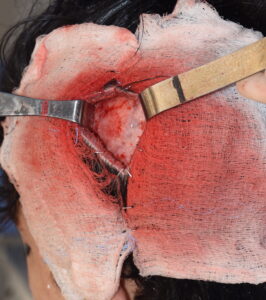 Reduction of the parietal eminence can be done to flatten the prominence of its angle. It is best approached through a direct vertical incision over it. The incision does not have to be long but direct. In patients with longer hair it is imperative that it is protected around high speed shaving equipment. Using sponges stapled along the incision is the most assured way to do so.

In parietal eminence skull reduction the bone is fairly thin in this transition area between the sides and back of the head. The outer cortex is removed which is about 3 to 4mms thick at most. Veins from the intracranial surface are usually seen in the reduction and once the become clearly evident the limit of skull reduction has been reached.