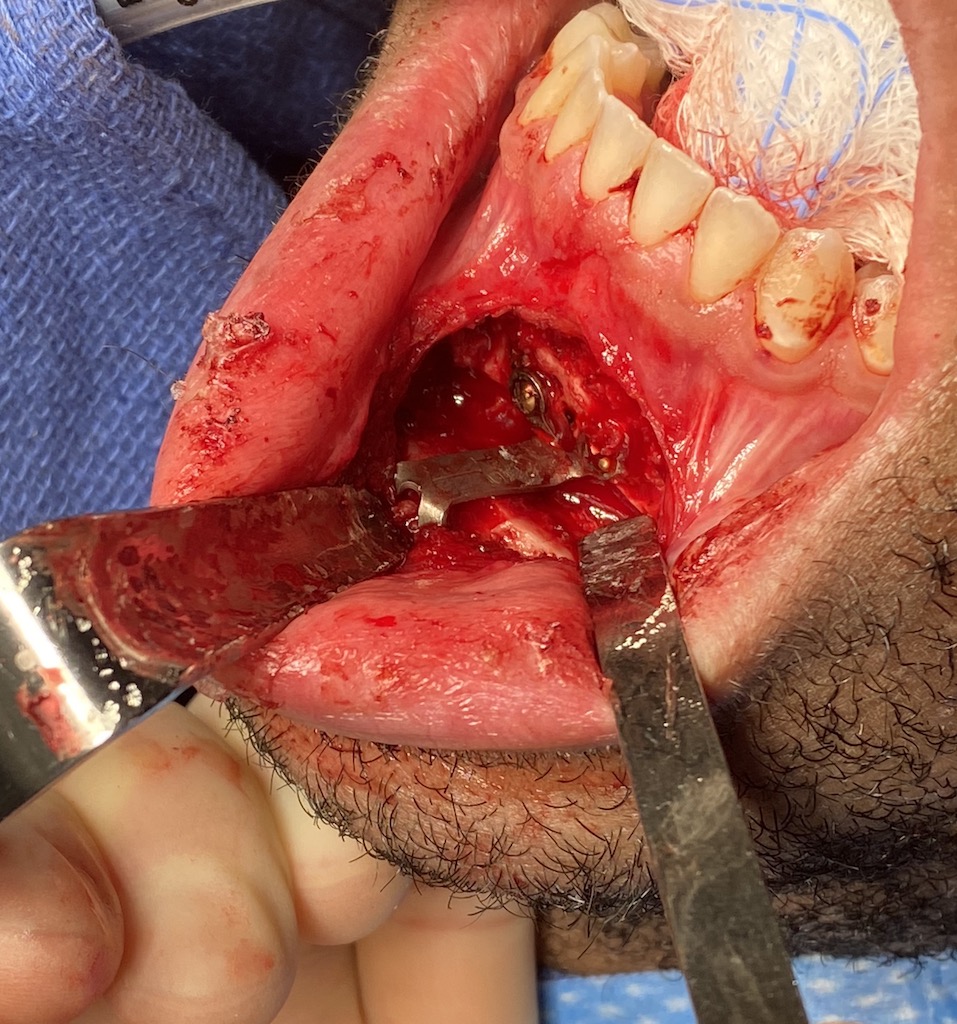 Background:  The sliding genioplasty is the autologous form of chin augmentation. Once the chin bone is cut and down fractured it can be moved to a new position both horizontally and vertically. The relevant question is what should that new chin bone position be. Ideally this should always be determined preoperatively by some form of assessment that involves the patient to determine their aesthetic desires. Unfortunately I find in too many cases (in fact almost all of them) that such a preoperative analysis has not been done.

While many sliding genioplasties have historically been done as part of orthognathic surgery, where at least a preoperative cephalometric analysis has been performed, many more sliding genioplastigs today are done outside of jaw surgery. It becomes less clear in this setting as how to make that preoperative assessment. Computer imaging of the patient’s pictures is the only technique and a good reference to use is the vertical line dropped down from the lip in profile view. Not that bringing the chin out to that vertical line is the ideal position for every patient (and most certainly not women) but it does provide some good insight if the chin is imaged behind, almost to it and right at it to see what the patient prefers.

Int major chin deficiencies, which are always a reflection of a jaw deficiency as well (which the patient may not want to or already has addressed) the interesting question is how much major movement can the chin bone sustain? Or what is the safest amount the chin can be brought forward. I have heard all sorts of numbers touted by surgeons which often is in single digits of horizontal projection. (less than 10mms) I suspect some of these movements are related to the concept that the chin bone must maintain some contact with the bone above in its new position. But anatomically the chin bone is a vascularized bone flap which maintains its viability by its soft tissue attachments. Whether it stays in contact with the bone above it is more relevant in terms of bony consolidation/stability…not in terms of survival. Case Study: This male had a prior sliding genioplasty of 8mms forward with 2mms vertical lengthening. Besides the chin still being very short he now developed an increased amount of lower lip incompetence that was greater than before surgery. He desired a secondary siding genioplasty with a further increase in horizontal projection and hopefully improvement in his lower lip incompetence. 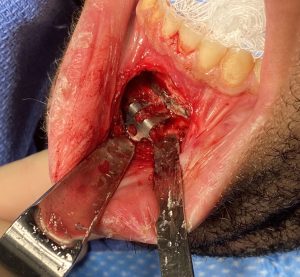 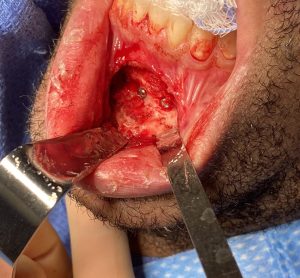 Under general anesthesia and through his existing intraoral vestibular scar, the chin bone was exposed and considerable time spent chipping off the bone to expose the hardware. The lower two screws and the horizontal bars and lower legs removed. The upper two screws could not be removed. (due to their heads being stripped) 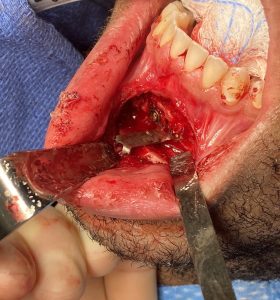 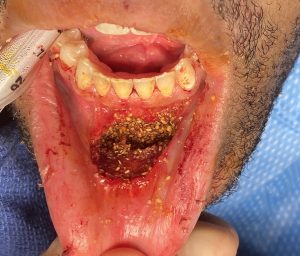 This enabled a secondary osteotomy to be done through the prior healed osteotomy line of the now step-shaped chin bone. The chin bone was downfractured and the chin advanced and a new 16mm fixation plate and screws applied. The plate and bone was bent upward after applied for some vertical shortening as well. The now larger chin bone step was filled in with 5ccs of hydrated corticocancellous bone chips. A two level mentalis muscle suspension was done prior to mucosal closure. 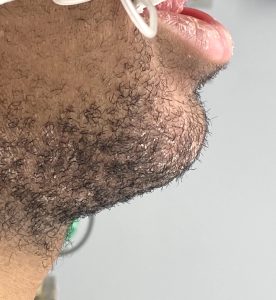 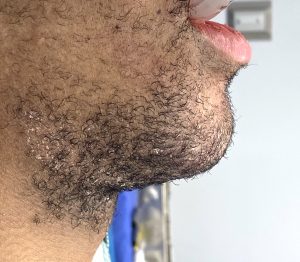 The intraoperative before and after showed the chin projection difference as well as the improved lower lip position.

1) In major chin/jaw deformities a sliding genioplasty, while the correct procedure, if not adequately projected may still leave the chin short and not correct lower lip incompetence.

2) In performing a secondary genioplasty an initial consideration is whether the existing fixation hardware can be adequately removed to perform a repeat osteotomy.