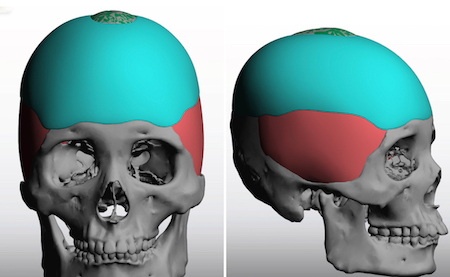 Background:  The skull is exposed to a variety of well known congenital shape defects known as craniosynostoses and deformations. When severe enough early cranial vault surgery is done to get an improved shape when the brain has the best opportunity to provide an effective expansile influence with the new shape. But some patients do have less severe skull shape deformations, which are often part of the spectrum of these known congenital skull deformities, whose diagnosis is either missed or early intervention was felt to not be warranted.

One such congenital skull shape deformity is the Inverted V Sagittal Crest Skull Deformity. This is really a limited or incomplete expression of sagittal craniosynostosis where the midline suture thickens and skull growth is restricted perpendicular to it. As a result a sagittal crest or ridge develops with increased height while the skull to the sides and back of it fails to grow normally. The resultant abnormal skull shape appears as a roof or inverted V shape from the front with an elongated front to back length. While not as severe as infantile sagittal craniosynostosis it nonetheless has a negative aesthetic influence on the patient affected.

While bony cranial vault reshaping can be done at a young age when the bones are thinner and more pliable, this is not an option as an older child, teen or adult. The magnitude of the surgery, blood loss, need for a full coronal scalp incision and the resultant bony contour deformities that would result make such a skull reshaping procedure ill-advised. Adults must seek out an operation that offers an improved skull shape with more a more acceptable risk profile. 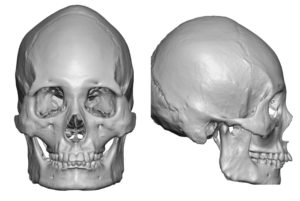 Case Study: This adult male presented with a fuller expression of the sagittal crest skull deformity. A high and prominent posterior sagittal crest was present with an inverted V shape frontal form and a more elongated front to back length when looking at his 3D CT scan. 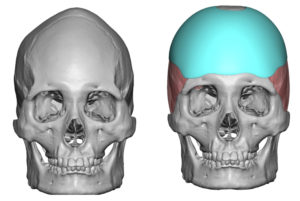 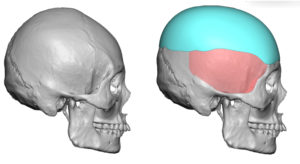 A treatment plan was created that involved the diametric movements of bony sagittal crest reduction (4mms) combined with a circumferential skull augmentation with a custom implant design.

Under general anesthesia an initial small irregular scalp incision was made through which the posterior sagittal crest reduction was done. A wide subperiosteal pocket on the bone and subfascial pocket on top of the temporal muscle was made. 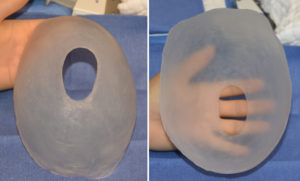 The scalp incision was lengthened a bit on each side through which the implant was to be inserted. Over thirty 4mm perfusion holes were placed in the implant. Due to its size it was necessary to do a geometric split of the implant into back and front pieces. Once passed through the incision it was reassembled into a single implant and secured with four 2mm screws. A two-layer scalp was then done after a drain. 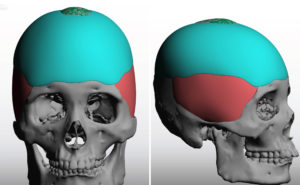 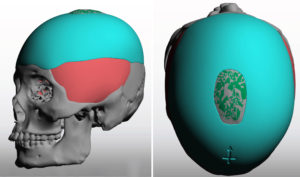 In the treatment of the Inverted V Skull Deformity the majority of the improvement comes from the augmentation of the parasagittal and occipital deficiencies. While some sagittal crest reduction can be done this is more limited and it can not be lowered enough to make any major skull shape change.

1) A major sagittal crest skull deformity (inverted V skull shape) is associated with a bilateral parasagittal skull deficiency…which is the major part of the deformity and the most treatable.

2) The inverted V skull shape deformity is treated with a combined approach of sagittal crest reduction and parasagittal-occipital augmentation.

3) While the sagittal crest reduction is more limited due to bone thickness, the skull augmentation effect is far greater.