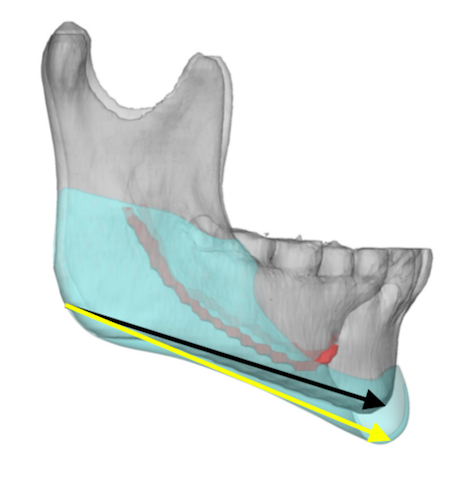 Background:  The shape of the entire face is heavily influenced by its underlying bone structure as is well known. While the effects of the overlying soft tissue do also have a significan influence on facial shape, that becomes less relevant the leaner one’s face becomes. This is seen along the jawline where thick facial and neck tissues can camouflage certain jaw shape abnormalities. Conversely a deficient jawline bone structure can make the soft tissues look thicker than they otherwise might be.

One jawline deficiency where a face can look shorter and fuller is in the flat mandibular plane angle patient. In cephalometrics the mandibular plane angle is identified as…… In the face this usually appears as a deficient vertical chin length and a more square look to the face in the front view. This can also be accompanied by a dental overbite which creates a lower jaw over rotation. It is also possible that the chin/lower facial thirds is of adequate length and that the posterior jaw angle length is too long, but this is much more uncommon.

Derotating the flat mandibular plane angle is primarily about vertical chin and anterior jawline lengthening. At the same time the jawline can also be enhanced by widening the jaw angles and squaring out the chin. Such 3D jawline augmentation changes can only be accomplished by a custom jawline implant design.

As many men undergo custom jawline implant augmentation, they often take it as an opportunity for a complete facial masculinization effort. Such changes involve the cheek and eye area using a custom infraorbital-malar implant as well. The goal is to have a higher and more defined cheeks with more support to the infraorbital rim area to help elevate the lower eyelids and achieve a more narrow eye shape.

Case Study: This male had short lower face with a 10 degree mandibular plane angle with a normal occlusion with a 1mm overbite relationship. He had thicker facial tissues. He desired an overall more pleasing jawline shape. At the same time he wanted a more narrow eye shape with decreased infraorbital hollows and an improved negative orbital vector. 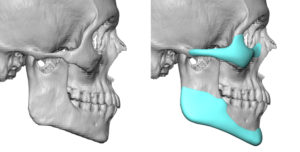 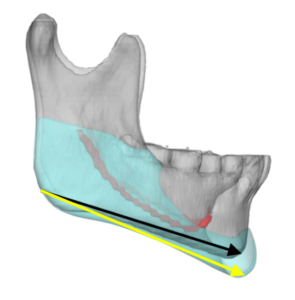 A 3D CT scan was used to create a custom jawline implant that lengthened his chin and jawline back to the end of the jaw angle. The jaw angle width increase was minimal, just enough to create a flange up over the bone for implant engagement and to correct a 4mm vertical jaw angle asymmetry. The infraorbital-malar implants raised the rims 4mms vertically and had a modest 2.5mm cheek projection.

The custom jawline implant was placed through a three incisional placement technique (submental skin and bilateral posterior vestibular intraoral incisions) in a front to back direction.

Male facial masculinization surgery typically involves changing the two linear skeletal lines of the jawline and eye-cheek areas. There are a lot of variations that can be done in the two custom implant design approaches. Such designs are driven by how to improve the external facial proportions and angles in both the frontal and side views. To no surprise the foundation of such facial disproportions and undesirable angles can be seen on 3D CT skeletal scans. These serve to provide direction to the design from which the details and magnitude of these changes are more artistically derived.

1) The flat mandibular plane lower face is one where the vertical length of the chin is close to the horizontal level as the jaw angles.

2) In a custom jawline implant the chin can be vertically lowered while keeping the jaw angle point at its natural position to create a more aesthetic mandibular plane angle.

3) To create a more narrow eye look the level of the infraorbital rim needs to be raised in a custom infraorbital-malar implant.