Background:  While jaw augmentation is most commonly associated as an aesthetic male procedure, it is done in women also. Women today can be just as concerned about the shape of their lower face and jawline. Many female celebrities, models and TV news women can be seen to have good jawlines. While the strength of the jaw angle area can vary, the consistent feature between all of them is a well defined straight line between the chin and jaw angles….and jaw angles that have a clear outline to them. This does not mean they are necessarily very strong, just that they are clearly visible.

But despite these gender tendencies, computer imaging remains the best preoperative method to determine what type of jawline change a woman seeks. They will usually point to some specific well known females, such as models and actresses, but these women usually have such leaner faces where their skeletal facial structure is more evident.

Case Study: This female desired augmentation of her jaw angles which she felt were too high and gave her a weak jawline. She also had jawline asymmetry with a deviation of the chin to the right with resultant jaw angle asymmetry. While a custom jaw angle implant approach is more ideal in the face of such asymmetries, standard implants were used. 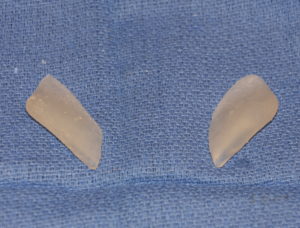 In the face of jaw asymmetry it is virtually impossible to ever have a symmetric result using standard jaw angle implants. She showed improvement in having a more visible jaw angle area and her asymmetry was not worsened.

2) The style of jaw angle implants used in women is typically more vertical than widening.

3) The size of jaw angle implants used in women should be smaller or more conservative as big changes are rarely needed.