Background:  The shape of the skull varies widely amongst people. Despite this variability there are certain skull shapes that are viewed as more pleasing than others. In general a more convex shape is desired whether seen from the side or front views. But beyond the general concept of convexity no specific shape numerical measurements exist that describe what an aesthetically pleasing head shape should be.

One ‘beauty approach’ to determining the most aesthetic skull shape has been the ‘nasoiniac arc’. This is a midline measurement taken in the side view between the frontonasal junction at the front of the skull back to the inion. (external occipital protuberance) In humans the nasoinion arc overlies the brain within the      supratentorial compartment. The two distinct demarcation points along the nasioiniac arc are the bregma and lambda. Bregma is the junction of the coronal and sagittal sutures and lambda is the junction of the lambdoid and sagittal sutures. Bregma subdivides the nasioiniac arc into a frontal arc (the surface distance between the nasion and bregma) and a parieto-occipital arc. (the surface distance between bregma and the inion).

Thee convexity of the skull can be assessed by studying the nasoinion arc and the ratios between between the nasion-bregma (NB) arc and the bregma-inion (BI) arc. It has been reported that the subdivision of the nasioiniac arc by bregma into two  unequal arcs is analogous to the geometrical division of a line into the Golden Ratio of roughly 1.6. It has been hypothesized that the well known Golden Ratio concept, which has been shown to exist in many other biological systems, may be present in human skull as well. 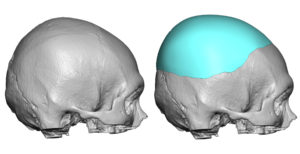 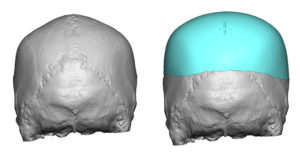 Case Study: This young male desired to have his head reshaped. He felt it needed volume overall but specifically on top along the sides particularly on the right parasagital area. He also wanted volume in the upper occipital region. Using his 3D CT scan of his skull a custom skull implant was designed that gave him the head shape he desired with a total volume of 160ccs. 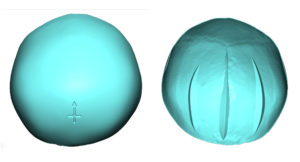 The custom skull implant was designed with internal wedges placed in a sagittal fashion for aid in placement during surgery. 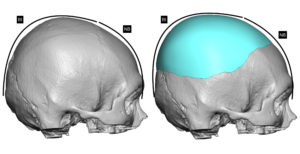 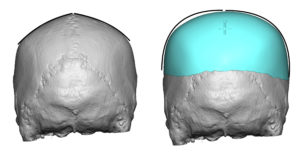 Assessment of the nasoinion arcs between his natural head shape and that of the custom skull implant in which he viewed as an improved head shape had NB/BI ratios of 1.4 (preop) vs 1.6. (postop) In the front/back view an improvement in the convexity of the top of the head could be seen.

Through an 8 cm horizontal scalp incision in the upper occipital scalp, the implant was able to be placed with the aid of the internal wedges in the design. Such wedges permit the implant to be rolled into a smaller size that is able to fit through a smaller scalp incision than its width would indicate that it could.

It is unknown (at least to me) whether the Golden Ratio concept is a useful one in which to design custom skull implants. But I will continue to make these measurements as such custom skull implants are designed to determine if an aesthetic pattern or consistency is seen.

1) The shape of the skull is a dual assessment of what is seeing in the side and front views, both of which has different desired curves.

2) The value of the Golden Ratio is achieving an improved head shape in custom skull implants remains unproven but can be measured by nasoinion arc measurements.

3) A more curved shape of the skull in the frontal view is often desired.