Background: Macrogenia is a generic term that refers to a large chin. But large chins come in a wide variety of shapes and dimensional excesses which do not respond to a single type of chin reduction surgery. It becomes important therefore to assess each case of macrogenia individually to determine its tissue composition for which the proper tissue reduction techniques can be applied.

Case Study: This male at rest had a bit of a larger chin with a more bulbous chin appearance. The projection of the chin exceeded the level of the jawline behind it. When smiling a large chin pad ptosis became apparent.

Under general anesthesia and through an intraoral approach a vertical chin resection as done by osteotomy with a boy wedge removal. To smooth out the indented areas behind the chin, prejowl implants were placed. Lastly a submental wedge of the chin pad was removed. 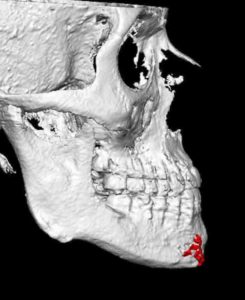 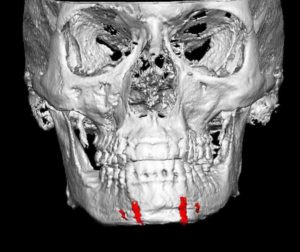 Successful chin reduction surgery requires a careful assessment of the tissue component of the problem. In this male, where chin reductions are uncommon, three chin shape problems existed…vertical bony excess, a prejowl deficiency behind the chin and a soft tissue chin pad excess. Executing a chin reshaping surgical plan that addresses all three problems has the best chance for an improved chin appearance both at rest and in smiling.

1) Large chins can be the result of excessive bone, a large soft tissue pad or both.

2) Many chin reductions require a combination of both bone and soft tissue reduction techniques.

3) The lateral prejowl implant adds width to a vertical chin reduction to achieve a smoother jawline behind the chin.