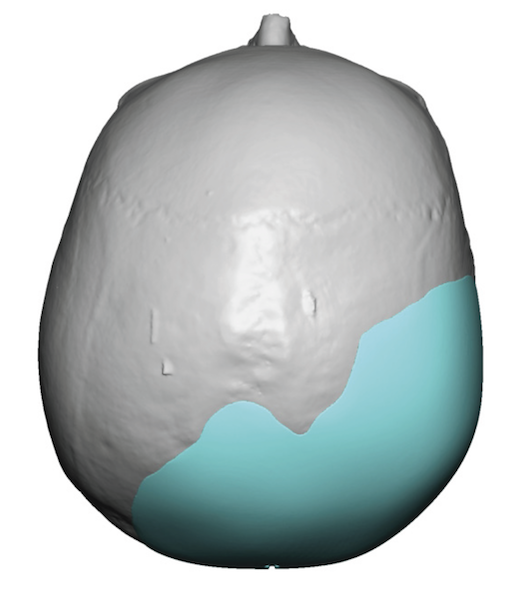 Background: The shape of the bony skull is affected by many factors both in utero and after birth. The most common aesthetic skull deformity without question is that from the effects of plagiocephaly. Once one side of the back of the head remains flatter than the other after two years of age, it will remain unchanged by any form of external molding or internal push of the growing brain.

The aesthetic effects of flattening of the back of the head tends to affect men more often than women for the obvious reason….greater exposure due to lack of hair coverage. Certainly today’s popular shaved head or very closely cropped hair style creates an aesthetic craniofacial feature not previously as well known…the shape of one’s head as seen from a 360 degree perspective. Despite the common experience of a shaved or closely cropped head male presenting for correction of a flat back of the head there are some patients that have good hair coverage but knowledge of the flat area on the back of their head is still bothersome to them.

In augmenting the flat back of the head there are two proven effective methods, one being better than the other. Traditionally bone cement was used to perform most aesthetic skull augmentations. To do so this creates three adverse tradeoffs…a long scalp incision to place it, the need to intraoperatively create a shape that has good symmetry to the opposite side and ensuring that an adequate volumetric effect is provided. Today the preferred technique is a custom skull implant which overcomes the the downsides of bone cements with smaller scalp incisions to place them and a preoperative design method that ensures optimal back of head symmetry and an adequate implant volume to do so. 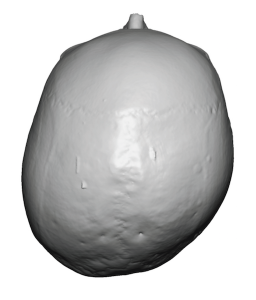 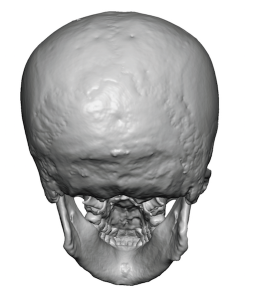 Case Study: This young male was bothered by a flat back of his head even though he had good hair coverage. A 3D CT scan showed the considerable flatness of the right side of the back of his head that extended well into the posterior temporal region. 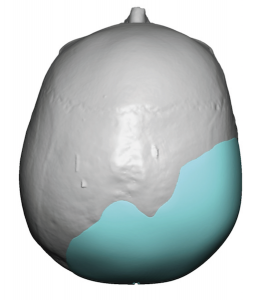 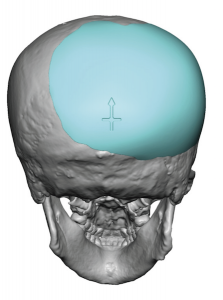 A custom skull implant was designed for correction that wrapped around the back of the head well onto the flatter right side. For optimal correction the implant design needs to extend onto the posterior temporal region which means this portion of the implant must be placed on top of the deep temporal fascia of the muscle. 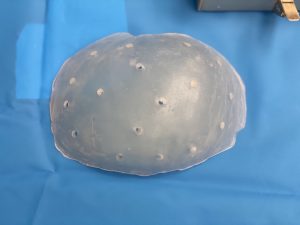 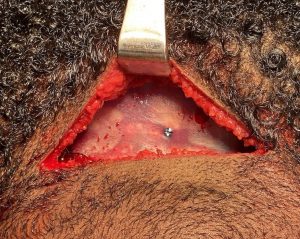 Under general anesthesia and in the prone position the custom skull implant was placed through a low horizontal scalp incision. It is important to note that to keep the scalp incision small (less wide than the diameter of the implant) adequate pocket dissection must be done in a blind fashion and the implant must be able to be changed in shape to pass through the incision. 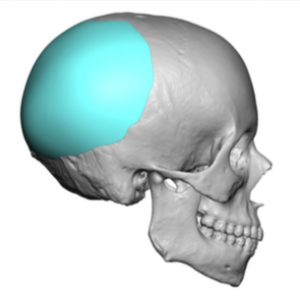 One of the very important design considerations for many back of head augmentations for asymmetry due to congenital flatness is how far forward the design must go forward in the flatter side. It must also go low enough along the occipital region as well to get optimal symmetry correction. This these necessary augmentation corrections could never be appreciated or accomplished with the use of bone cements.

1) Plagiocephaly causes a profound flattening of the back of the head that can be bothersome even to those with a full head of hair.

2) The use of a 3D CT scan allows an implant design that optimally corrects the shape of the back of the head BEFORE the surgery is actually performed.

3) With an established design the goal in surgery is to get the implant placed in the correct position through as small a scalp incision as possible.