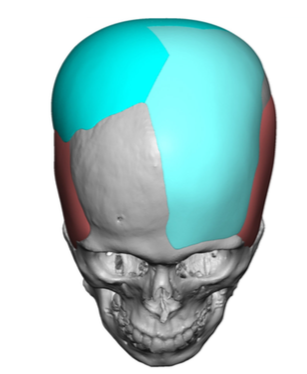 Background: Plagiocephaly is a well known congenital skull deformity that is best described as a cranioscoliosis effect. This simply means that the skull is rotated on his vertical axis resulting in a twisted appearance. This creates a classic skull shape seen as flat on one side of the back of the head (more severe) followed by a contralateral flattening on the opposite side of the head on the forehead. (less severe) With this twisted skull shape there are often other associated anomalies such as a difference in the position of the ears with the ear on the flatter side of the back of the head being more forward than the opposite ear position.

In the adult treatment of plagiocephaly the most common approach is augmentation of the flat back of the head in most patients as that is their area of greatest aesthetic concern. Many patients have some forehead asymmetry but often not enough to warrant treatment. For men so affected the forehead asymmetry may not be treated because the access to do so is limited or non-existant due to lack of any acceptable location to place an incision.

For the flatter back of the head custom skull implants are commonly designed and placed through a small scalp incision. While larger custom skull implants can be designed to more fully address the extent of plagiocephalic skull deformities, the questions are how should the implant be designed as well as how can it be placed without undue scalp scarring. The latter incisional issue is the key one as it is important to not tradeoff one aesthetic issue (skull shape deformity) for another. (scarring)

Case Study: This male had a significant counter clockwise plagiocephaly deformity which affected both the back and front of his skull. He initially requested skull reductions (larger left side of the back of the head and right forehead protrusion) to see how much improvement could be obtained. These reductive changes were more modest, as could be predicted, and then he sought a more effective augmentation approach. 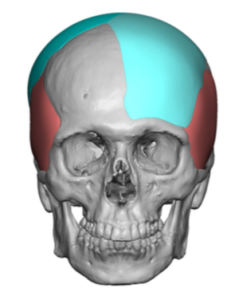 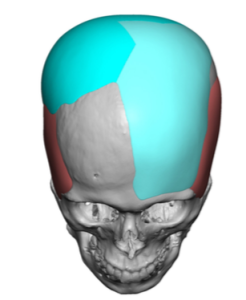 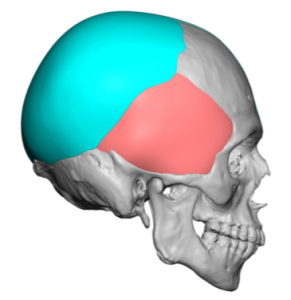 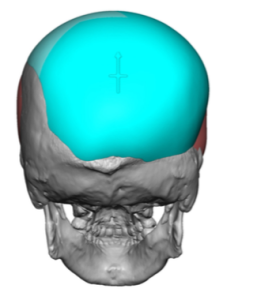 Using his 3D skull CT scan and mirroring software an augmentation implant design was done that matched the lesser to the greater side. Since it is not possible to place such a skull implant that covers such a large surface area in one piece, unless one has a full coronal scalp incision, it was designed in two pieces to be placed as such. 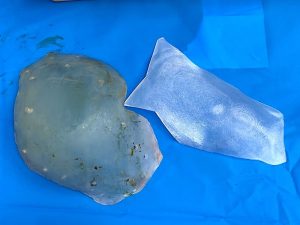 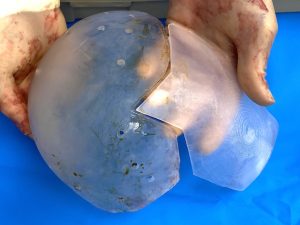 In surgery the two piece concept of the implant could be appreciated with a sharp triangular interdigitating interface. 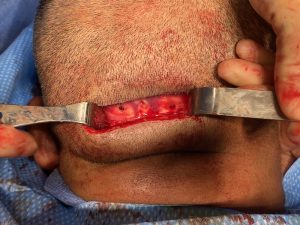 Under general anesthesia, in the prone position (face down), and through his existing occipital scalp incision the thicker back of the had implant was placed and secured with two small screws. Getting this part of the implant into the exact position as designed is critical as it will affect how the anterior piece fits to it and where the implant falls on the forehead. 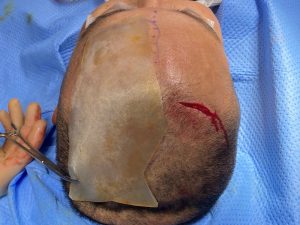 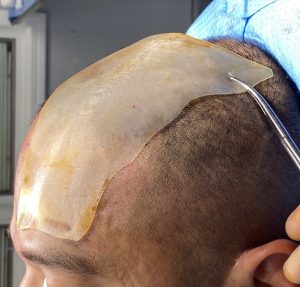 He was then repositioned into the supine position (face up) so that the anterior skull implant piece could be placed through his existing right frontal hairline incision which existed because of the prior right forehead reduction. Looking at the size of the incision vs the implant, the task of placing it through it seems daunting….not to mention ensuring that its fit into the previously placed posterior implant is exact. 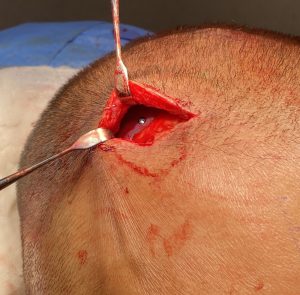 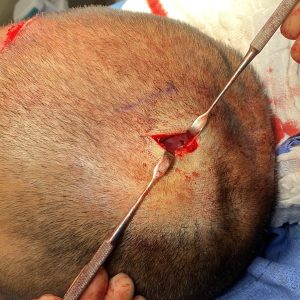 Once the anterior forehead piece was inserted a single screw was used to fix the right anterior extension of the posterior implant which was close to the right frontal hairline incision. A small incision was then made directly over the triangular interface to check their fit and secure the two sides with small screws and sutures. 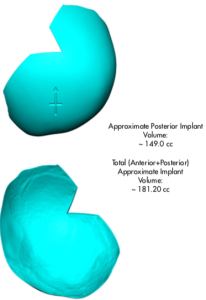 Besides getting such a large skull implant placed without undue scarring it is also important to consider its overall volume. The scalp does have limits as to how much it can stretch so keeping the implant’s volume under 200ccs is critical.

1) Plagiocephaly affects the entire skull, most significantly on the back of the head but also on the frontal forehead as well.

2) A more complete plagiocephaly correction requires a skull implant that covers much of the front to back surface area of the skull.