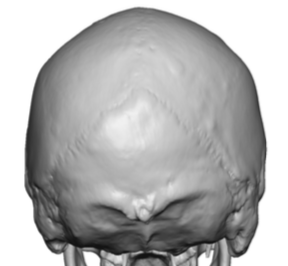 Background:  While the front of the skull (forehead) has several notable bony features, the topography of the back of the skull is less appreciated. Part of this lack of recognition is that it is the most difficult area of the skull to see and because   its potential bony features only appear when they are abnormally prominent. 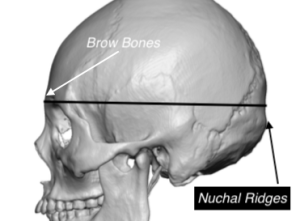 One of these back of head bony features are the horizontal nuchal or nape of the neck lines. There are a series of four lines on the occipital bone to which various neck muscles and ligaments attach. The line that can become very prominent, like a visible raised ridge, is the superior line to which the splenius capitus, trapezius and occipitalis muscles attach. The enlargement of this nuchal line appears to primarily occur in men perhaps due to the stronger pull of the neck muscles in men. It may appear in women but I have never seen it or been requested to reduce it by a female.

A major reason men seek treatment of a prominent nuchal ridge is that it is easily seen in short hair or a shaved head. While referred to as a line or ridge, it is not really a true straight line. It usually has a gullwing appearance due to the central inion or knob of bone from which the raised ridges extend out laterally from it.

Case Study: This male was bothered by a prominent ridge that stuck out on the back of head. Because he had hair its actual shape could not be appreciated other than a bulge that was easily seen in profile. The site of the ridge was partially magnified by a somewhat flatter back of the head profile superior to it. 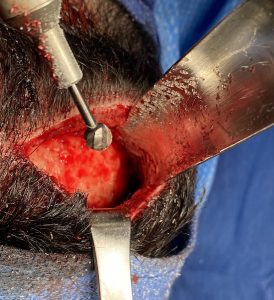 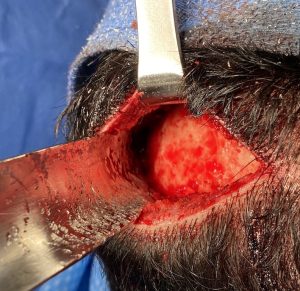 Under general anesthesia and in the prone position a horizontal 7 cm incision was made in the midline. After going through typical thick scalp tissue the bony ridge was widely exposed by subperiosteal undermining. Release of some muscle fibers was necessary to get to the underside of the ridge.  A high speed handpiece and burr was used to sequentially remove sections of the bony ridge starting in the midline and working out laterally. With such a small incision this is done through a tunnel technique using special shaped retractors to do so. 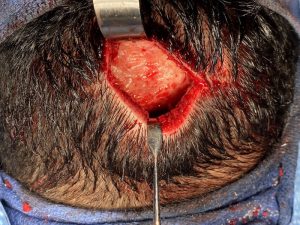 One of the keys to the ridge reduction is to keep a curved shape to it particularly  the more lateral one goes. It is easy to create a deeper reduction in the middle where the direct visual access is greatest. But to keep a curved shape to the back of the head it is necessary to do a near equal amount of bone reduction laterally as central. At the conclusion of the bone reduction and prior to scalp closure a drain is placed which will be removed the following day. 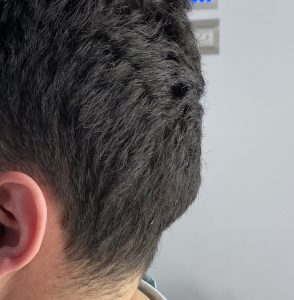 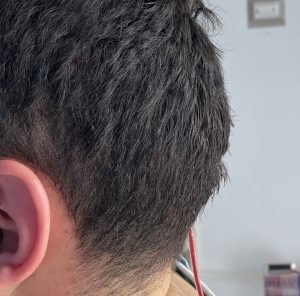 His intraoperative results showed a good reduction of the bony ridge in profile.

1) A prominent horizontal ridge seen on the bottom of the back of the skull is the nuchal ridge to which multiple neck muscles attach.

2) Reduction of the prominent nuchal ridge is done by high speed burring through a tunnel technique from a small central scalp incision.

3) The bone thickness of the prominent nuchal ridge is one of the thickest on the entire skull so its reduction is perfectly safe.