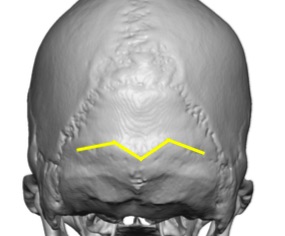 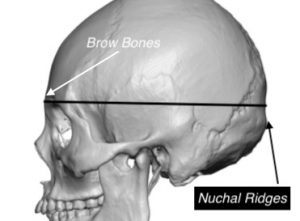 Background:  The bottom of the back of the head (occiput) has numerous similarities to the brow bones of the front of the head. (forehead) They are both at the same horizontal level at the bottom of their primary bone plate ends (which is surprising to many), are locations for various muscular attachments, and can develop unaesthetic bony prominences in men that have very similar eagle wing shapes. These bony characteristics are well recognized on the forehead but less appreciated on the back of the head.

The occipital knob or inion is a midline bony projection that everyone has to some degree but it far more likely to become enlarged in men. It is also most certainly more of an aesthetic issue if it does become more prominent in men because of shorter hairstyles and shaved heads. Occipital knob enlargement appears as a central ball protruding outward disrupting the smooth convex shape of the back of the head both in direct and side views.

While the occipital knob skull deformity often appears in isolation, the nuchal ridges next to it can also become enlarged. Together the shape of the combined knob-nuchal ridge complex creates an ‘eagle wing’ appearance as the knob projects downward wile the nuchal ridges come off of it in a higher position. Both represent bony skull thickenings that are amenable to surgical reduction with minimal scarring in experienced hands.

Case Study: This thin male was bothered by the bony protrusion on the back of his head which consisted of a central knob and raised edges beside it for a few centimeters out laterally on each side. There was also a vertical muscle band that could be seen going up to the knob of bone centrally.

When the desired bony areas were marked out they had an eagle wing appearance. Under general anesthesia and through a 4 cm scalp incision the bottom end of the occipital bone was exposed. Using a high speed drill and burr the central occipital knob and lateral nuchal ridges were reduced.

One of the key maneuvers in the occipital knob reduction is to appreciate that it extends inferiorly. Thus to get an adequate reduction it is necessary to release the fascia and superficial splenius capitus muscle fibers to get adequate exposure to its lower end to and reduce it inward so it has a convex curve shape.

The occipital knob-nuchal ridge skull protrusion can be adequately ‘dewinged’ through a very limited scalp incision that heals with a fine scar line that his virtually undetectable.

2) Reduction of the occipital knob must be carried inferiorly enough to flatten its projection below the musculofascial attachments.

3) The nuchal ridge skull reductions are carried out laterally from the occipital knob to eliminate the eagle wing appearance.