Background: While the skull appears as a smooth surfaced structure it has numerous raised bony areas at its edges. These are most apparent at the front of the skull in the brow area as well as on the back of the skull at its lower edge.  These larger bony prominences have a purpose and are typically the result of musculoligamentous attachments. The effects of muscular contraction results in the development of more bone at these points to support them.

On the back of the skull (occiput) these raised bony areas are particularly seen due to the attachments of the neck muscles and their overlying fascia. Known as the nuchal lines, these are four curved ridges of bone of which the most visible is the superior nuchal line which serves as attachments for the splenius capitis, trapezius and occipitals muscles. The superior nuchal line exists on both sides of the occipital skull and meets in the middle as the external occipital protuberance, also known as the occipital knob.

The occipital knob is prone to overgrowth and is a not infrequent unaesthetic enlargement seen at the center of the inferior edge of the back of the head. While this generally occurs as an isolated knob of bone, it can also occur with enlargement of the superior nuchal line on each side of it. This creates a gull wing shape appearance which is most noticeable on the shaved male head.

Case Study: This young male was bothered by a moderately-sized occipital knob which he wanted reduced. He also had prominent superior nuchal ridges which could also be reduced by extending the incision. But to do so was not worth it to him with his shaved head. 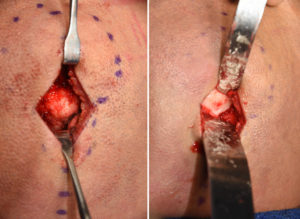 Under general anesthesia and in the prone position, a 3 cm horizontal skin incision was made just below the knob is a kin crease. Through the thick scalp tissue wide subperiosteal undermining was done to expose the bony knob as far down as its curved underside. Using a high speed burring technique the 14mm thick bony prominence was reduced with feathering out along the medial ends of the nuchal ridges as much as the incisional length would permit.

The small incisional approach to occipital knob skull reduction is important as many patients who have the procedure have a lot of ‘scalp show’. This also applies to the appearance of the nuchal ridge. While it can be reduced the aesthetic decision about the longer incision to do so must be considered carefully.

2) Both the occipital knob and nuchal ridge represent bony overgrowths or exostoses.

3) While the occipital knob can be reduced through a small direct scalp incision the  nuchal ridge requires a much longer incision to reduce.