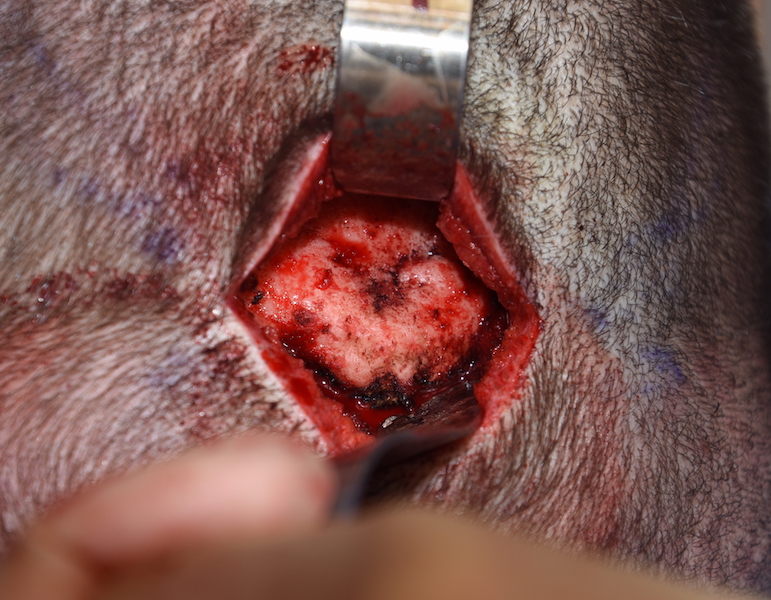 Background: The occipital knob is a well recognized skull deformity with a central protrusion of bone at the bottom of the skull where the neck muscles attach. The knob is now by a variety of names such as inion or external occipital prominence. Like many common bony protrusions all over the craniofacial skeleton it has a functional purpose. It is where some fibers of the trapezius muscle and the ligamentous nuchal attach. It is the pull these attachments that creates the excess bone to support them. This most likely explains why, in my observation, that the larger the occipital knob the bigger the person is. And also why I have yet t see a prominent occipital knob in a female.

With this large protrusion of bone at the lower end of the occiput the shape of the occipital skull above it may appear flattened in profile. This can be an illusion because of the size of the lower bony protrusion or it can be an actual lack of bony convexity. The shape of it is usually the giveaway based on if it appears more flat the round. But in considering whether to augment this area as part of the reduction of the lower bony protrusion, computer imaging should be done to see how the shape of the head looks with a reduction alone or combined with an upper augmentation. 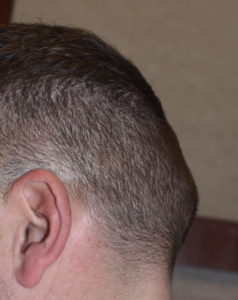 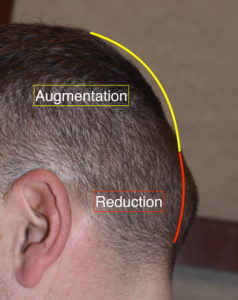 Case Study: This male presented with a large protrusion of bone on the back of his head that had always bothered him. In discussing its reduction it was determined that the best back of the head shape would come from a combination of the reduction of the protrusion and augmentation of the flatter occipital bone above it. 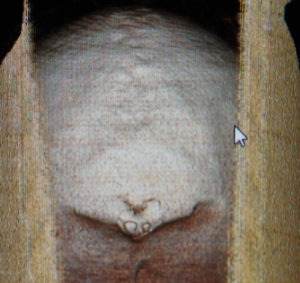 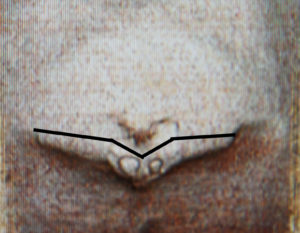 Due to the size of the protrusion a 3D CT scan was done which showed a prominent occipital knob with enlargements of the superior nuchal line extending outward from it. A coronal slice through the knob showed that was a large spike of bone with a corresponding thickening of bone on the intracranial surface as well. 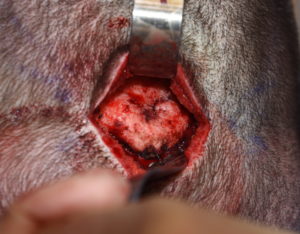 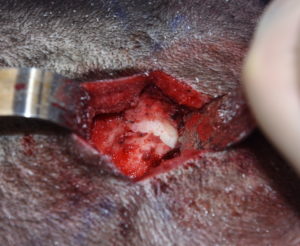 Under general anesthesia and in the prone position a 7cm horizontal beveled scalp incision was made over the knob. Wide subperiosteal undermining in which the muscle fibers were released off of the inferior edge of the superior nuchal line as well as way above it to the crown and down along the sides of they occipital skull. A high speed handpiece and burr was used to create a midline cut through the enlarged bone to establish the depth of the bone to be removed which was 12mms. This was carried down to the undersurface of the inferior occipital edge. Then all of the enlarged bone was removed laterally. 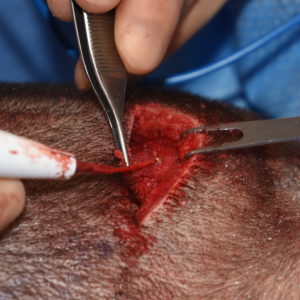 One important step after the bone is removed that is frequently overlooked is the thinning out of the deeper tissues (galea) over the reduced occipital knob/nuchal line protrusion. This helps to ensure that the area lays as flat as possible. 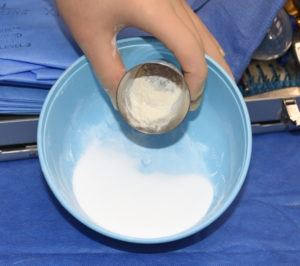 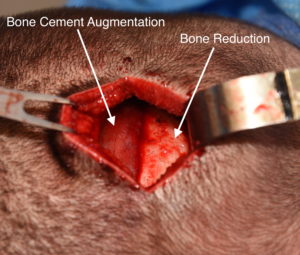 Once the inferior occipital bone was removed, 45 grams of PMMA bone cement mild with antibiotic powder was used to augment the back of the head above the bone removal site.

In larger occipital knob skull deformities the superior nuchal line may also be involved requiring more extensive bone reduction efforts. With these larger inferior bony protrusions the occipital skull above it may be flatter requiring concurrent skull augmentation for a more balanced shape to the back of the head.

1) In larger occipital knob skull deformities the adding nuchal ridge may also be enlarged in an ‘eagle wing’ pattern of raised bone.

2) Flattening of the occipital bone above a lower occipital bony protrusion creates a complete unaesthetic shape to the back of the head.

3) A combined lower occipital skull reduction can be combined with an upper occipital augmentation for a complete reshaping of the back of the head.