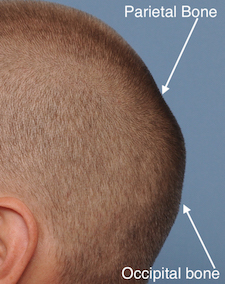 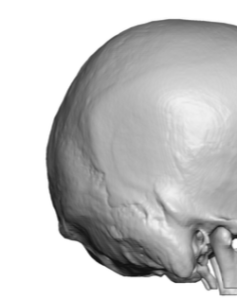 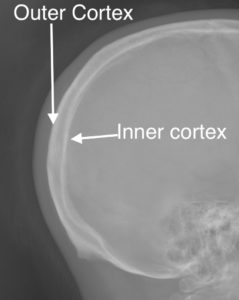 When it comes to concerns about a back of the head that is excessively long or protrusive, the apex of the projection is usually at the parietal-occipital bone junction. The skull is not as thick in this area as it is near the lower occipital bone but is still capable of being surgically reduced. Like in any other skull area, the bone is a bicortical composition of which the outer cortex can be safely removed. The thickness of this outer cortex is typically in the range of 6 to 7mms and is easily visible in a traditional lateral skull film.

When performing occipital skull reduction it is important to have a centric incision located over the most prominent area but it must be relatively small in length. Most such scalp incisions are in the range of 7 to 9 cms. What is unique about this incision is that it provides access for a non-linear type of bone reduction. The occipital protrusion can not just be reduced into a flat spot or plateau. Rather the bone reduction must be curvilinear for a reduced prominence but still have some convex shape to it.

Case Study: This patient was bothered by a back of head protrusion of which the apex was located at the junction of the occipital and parietal bones in the midline. This is also where the sagittal suture connects with the lambdoidal suture during development.

Under general anesthesia and through a 7cm long horizontal scalp incision placed directly over the apex of the protrusion, the outer cortex of the skull was removed by high speed burring.While improvement was initially obtained he returned 6 months for a secondary burring procedure to remove ay remaining bone thickness that could be removed. 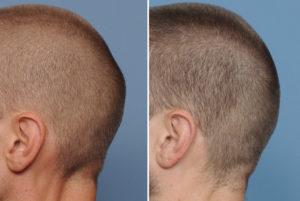 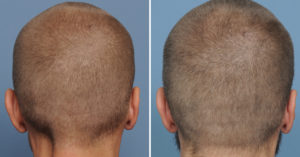 His postoperative results after the two procedures shows a reduced and smooth back of head convexity. His scalp incision healed well even after two surgical entries.

This case demonstrates that moderate occipital protrusions can be satisfactorily reduced. While any skull reduction procedure is done to the ‘max”, which means the bone is removed down right next to the diploid space, secondary further bone removal is possible. This is because the burred surface forms ‘bone sclerosis’ which will permit some additional bone removal in the future.

1) The success of occipital skull reductions is based on the thickness of the bone and on how much of it can be safely removed.

2) It is important to limit the length of the occipital scalp incision in performing skull reductions for the aesthetics of the scar’s appearance.

3) Making the occipital bone reduction smooth and curved is challenging through a small scalp incision.