Background:  The brow bone represents a relatively small amount of the total forehead surface area. But its contribution to the appearance of the upper third of the face exceeds its percent of surface area coverage. It provides some gender specificity as well as contributes to the appearance of the eyes. While some women and almost all transgender male to female patients may want the brow bones reduced, men with little prominence want them augmented.

There really is only one good way to perform brow bone augmentation…and that is through the use of a custom designed brow bone implant. Besides having complete preoperative control of its shape and dimensions, it can also be placed through the small discrete incisions. The use of bone cements for brow bone augmentation is really an outdated technique due o lack of precise control of its shape, inability to ever get it low enough on the brow bone and along the lateral orbital rim and the need for much larger scalp incisions to place it. Short of already having a wide open coronal scalp incision and exposure to the lower forehead for other reasons I can not think of any aesthetic benefit for the use of bone cements as an onlay in this forehead area.

Designing a brow bone implant must first lay out its footprint (outline) before creating its dimensions. The implant footprint considers how low on or over the supraorbital rim it needs to be, how far down along the lateral orbital rim it should extend and at what level the brow bone break should occur. Dimensional considerations include the amount of forward projection at three specific points, glabella, mid-pupil and brow-lateral orbital rim transition area. Lastly, in profile, the shape of the projection needs to be determined. 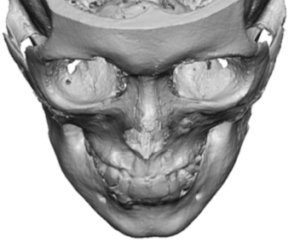 Using is 3D CT scan a brow bone implant design was done extending down past the fronto-zygomatic suture line. The forward projection was 7mms with 5mms centrally.

Under general anesthesia a triangulated incisional approach was done with a 3cm scalp (behind the frontal hairline) and bilateral 10mm lateral upper eyelid incisions. Subperiosteal pocket dissection was done aide by an endoscope for the release along the supraorbital rims with preservation of nerves. The upper eyelid incisions were key as that is the only way to get complete pocket development low enough on the lateral orbital rims given the implant design.

With tryin of the implant it was determined that the glabellar area was too prominent and it was reduced by hand carving with a scalpel.

The implant was inserted through the scalp incision. Angling the implant in using its shape makes this possible as at no point along the implant is it wider or higher than the incision’s length.

The hardest and most important aspect of brow bone implant placement is to get it low enough…and low enough is very important for many male brow bone augmentation as that is the look they seek. Pulling the lateral orbital rim ‘wings’ down and getting them properly positioned and secured into place can only be assured with the small upper eyelid incision.

The endoscope can be used to check for positioning along the lower forehead as well as to remove any hairs that may have inadvertently introduced during passage through the scalp incision.

The key to custom to brow bone implant placement is getting adequate release of the periorbital tissues along the inferior aspect of the orbital rims all the way across. The triangulated incision method allows this to be done is the most assured manner combining endoscopic and direct visual methods.

1) Augmentation of the flat brow bones in a male is best done with a custom brow bone implant.

2) The design of a custom brow bone implant must consider its complex topography and not just th amount of horizontal projection desired.