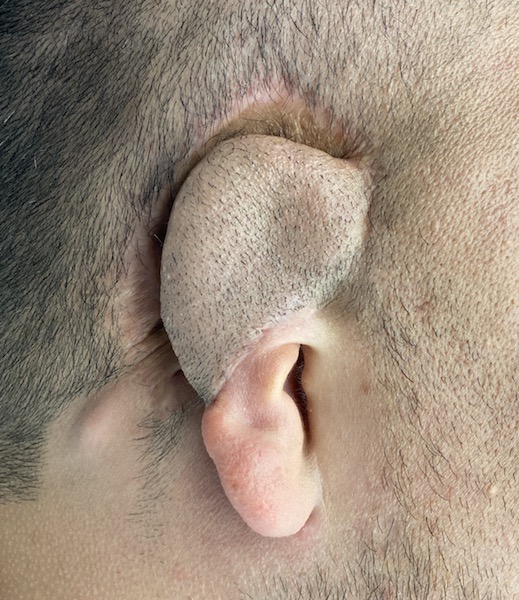 Background: Congenital absence of part or most of the ear is known as microtia. The reconstruction of microtia has a well established history which consists of removal of the remaining deformed ear cartilage and replacement with a hand carved rib graft framework. Soft tissue coverage of the ear framework typically comes from the elevation of the overlying and surrounding skin of the deformed ear. Hair coverage of the upper part of the ear reconstruction usually occurs because the temporal hairline is naturally lower in such congenital ear deformities. Putting in a rib graft framework that matches the vertical level of the opposite norma ear invariably puts it under this lower hairline. Secondary management strategies of this displaced hair are often needed.

A less common ear reconstruction technique, and in particular used in the avulsed ear where the overlying skin is lost, is the use of a vascularized fascial flap and skin graft. To create viable skin coverage over the rib cartilage ear framework, a fascial flap based on the superficial temporal artery is elevated and rotated down to cover the cartilage reconstruction. Onto this vascularized surface is a skin graft placed. This creates non-hair bearing skin on the ear that also allows the details in the carved cartilage framework to show through the thin skin cover.

While full-thickness scalp flaps are commonly used in a variety of scalp reconstructions, where hair bearing coverage is desired, this is a contraindication for three reasons, 1) it will contain hair which then must constantly be shaved, 2) the thickness of the scalp will not allow any details to show through that have been carved into the cartilage framework, and 3) it will be necessary to skin graft the local scalp area from whence it came…now creating two reconstruction sites right next to each other. 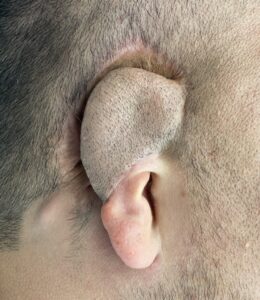 Case Study: This adult male presented with a right congenital microtia reconstruction done as a child in Mexico where a rib graft framework was covered with a local scalp flap. He had to shave the reconstructed part of his ear since. Why such a scalp flap was used for coverage is not known. 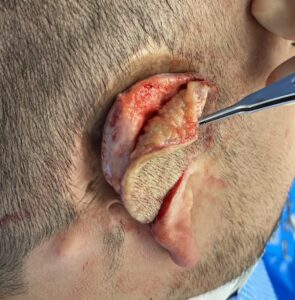 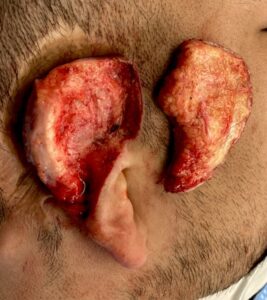 Under general anesthesia the thick scalp flap as removed, leaving a thin layer of vascularized tissue over the rib cartilage. 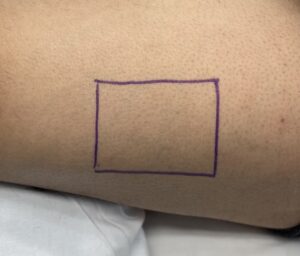 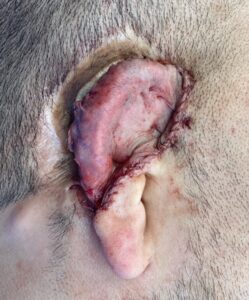 as harvested from the thigh and used as a replacement for the thick scalp flap. Quilting sutures were placed through the cartilage framework tacking down the skin graft into the few open areas of the framework that could be found. The earlobe was also reduced in thickness and length as part of the reconstruction. A bolster sen graft dressing was applied.

The bolster dressing will be taken off one week after the surgery when the graft will have developed adequate revascularization.

It remains to be seen how much better the reconstructed ear will look as it will take a few months for full healing. But there is one outcome that is assured…he will never have to shave his ear again.

1) Reconstruction of congenital microtia consists of a rib cartilage framework and soft tissue coverage which could be a vascularized fascia flap and skin graft.

2) This microtia patient presented with a prior reconstruction of a rib graft cartilage framework covered with a hair- bearing scalp flap.

3) To create as better looking ear and one that he no longer had to shave, the scalp flap was removed and replaced with a skin graft.