Background: Vertical chin lengthening can be done by either an implant or a lengthening of the bone. While implants have limitations as to how much lengthening can be effectively done, osteotomies do not. While some surgeons feel that the amount of vertical chin lengthening needs to be limited this appears to be based on a concern of the interpositional bone gap created to heal.  This has not been my experience but that concern is obviated by always grafting the interpositional gap. This is almost always done by tissue bank bone grafts, either corticocancellous chips or blocks.

How much vertical chin lengthening can be done is based, in my experience, on how much the bony gap can be pushed open during surgery. In almost all patients this can be at least 10mms which is usually enough for most patient’s aesthetic needs. Beyond 10mms resistance is often encountered and getting to 12 or 14mms can be very difficult to impossible. There is also the challenges of getting fixation hardware adequately applied across every enlarging bony gaps.

While significant vertical bone lengthening can be achieved in a primary procedure, how much can be done in a chin that has already had a sliding genioplasty performed? Does the previous osteotomy cause scar that limits the amount of bone movement? Can the hardware that has been used be satisfactorily removed? 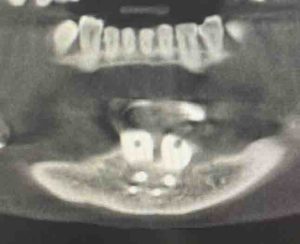 Case Study: This male had prior jaw surgery including a sliding genioplasty. The genioplasty was believed to be primarily a horizontal movement with a little vertical lengthening. His panorex x-ray showed a fixation plate of aubstantial size in the midline with multiple screw holes. How many screws were used could not be clearly seen on the x-rays. His secondary genioplasty goal was maximal vertical lengthening as much as up to 20mms if possible. 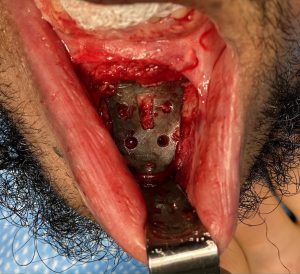 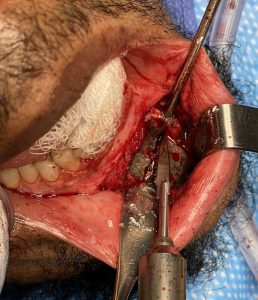 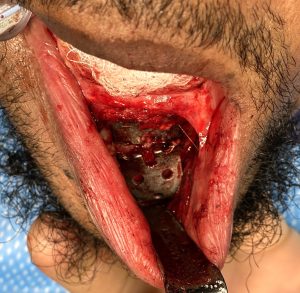 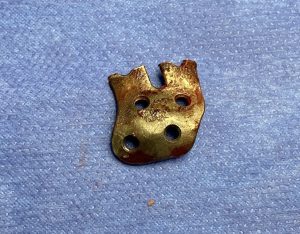 Under general anesthesia and through his existing intraoral incision the chin soft tissues were elevated and a large fixation plate exposed. It was an unusually large and thick fixation plate whose shape i had not seen before. In fact I believe it was not a fixation plate meant to be used in the chin but some other part of the lower jaw.While the bottom four screws could be removed the tope three screw heads were stripped and could not be removed. That left the only option is to cut the plate with a reciprocating saw through the screw holes (because they had the least amount of material) above where a horizontal osteotomy was to be made. This was eventually accomplished but too a long time as the plate most likely was made if vitallium. (a cobalt chrome ion alloy) 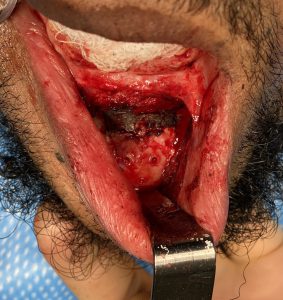 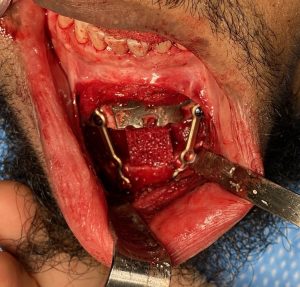 With most of the chin bone exposed the osteotomy was performed and the chin vertically lengthened 14mms. More vertical chin lengthening could have been done but that pulled down on the lower lip too much. Interpositional tissue bone blocks were used to hold the gap as a wedge and vertical plate and screws were applied to the sides of the remaining original fixation plate.

This case illustrates several issues. First, large fixation plates are not really needed for chin osteotomies to heal as the chin is not exposed to any significant displacement forces. Large plates with lots of screws can make for a difficult secondary genioplasty should the plate not be able to be removed. Whether surgeons realize it or not up to 20% of bony genioplastigs will eventually undergo another chin bone surgery for a variety of aesthetic improvements. Secondly, a prior genioplasty may limit subsequent movements due to scar tissue and other soft tissue limiting effects.

2) While total chin hardware removal is desired enough of the hardware must be removed to at least complete a side to side osteotomy.

3) Significant vertical chin lengthening requires an interpositional graft and the consideration of whether the lower lip will be pulled down with it.