Background:  The shape of the head consists of five zones of projection. There is the height superiorly, projection anteriorly (forehead) and posteriorly (back of head) and bilaterally at the sides. (temporal) Differing thicknesses and contours of all of these areas combined create the total head shape appearance. Anthropometric studies of head shape have been extensively investigated using such measurements as head circumference, cephalic index and head volume. Such normative values from these measurements are useful in determining abnormal head shapes and how they respond to surgical manipulation.

When aesthetic skull augmentations are performed they are typically done to improve head shape proportion. While it is possible  that only one of the five zones is deficient, most of the time it is more than one area that needs increased projection. This is particularly true in larger skull augmentations, in which more than one custom implant placement has been used. As the top and/or back of the head gets bigger, the risk of head shape distortion can occur. As the top of the head gets bigger one must consider whether the sides of the head should also have increased projection. 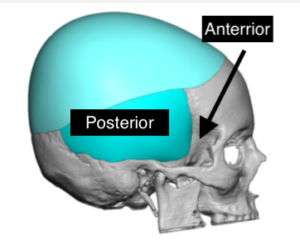 Case Study: This female had a prior history of two custom skull implants. She wanted to achieve even greater skull augmentation on top with one final custom skull implant. In looking at the implant design it became apparent that its height of almost 25mm left the sides looking too narrow. Thus custom temporal implants were designed for the sides to be placed in a submuscular position. Standard extended temporal implants were to be used for the anterior temporal region placed in the subfascial location. 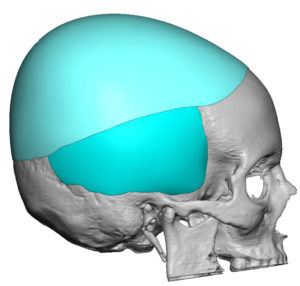 While the custom skull and posterior temporal implants will overlap they are in different tissue pockets.

Under general anesthesia a superior postauricular incision was made. Dissection initially was done down to the deep temporal fascia which as opened and a subfascial pocket made from the side of the eye back into the temporal hairline. A standard extended anterior temporal implant was placed into the subfascial pocket. A submuscular pocket was subsequently created into which the larger posterior temporal implant was placed down on the bone. It was secured with a single screw to the bone. Once the temporal implants were placed the custom skull implant was replaced with the larger one through an existing scalp scar/incision.

Temporal augmentation may need to considered when the superior skull augmentation becomes considerable in size. To keep the implant pockets separate the temporal implants can be placed as one combined anterior-posterior implant in the subfascial pocket or it can be split into two separate pockets. (submuscular posterior implant and subfascial anterior implant) There are arguments to be made for either approach and that decision depends on how thick the temporal implants are.

1) With increasing skull height augmentation the sides of the head come into consideration to maintain head shape proportion.

3) Anterior and posterior temporal implants can be placed through a postauricular incisional approach.