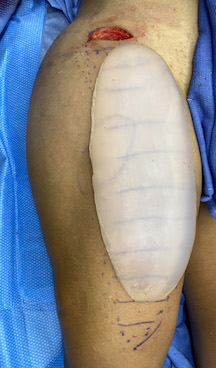 The upper leg is not typically though of as capable of having any form of augmentation for an improved shape or muscular appearance. But the long longitudinal quad muscles do present an opportunity for subfascial implant placement. This is particularly relevant to the rectus femoris and vastus lateralis muscle groups which represent the largest of the quad muscles. 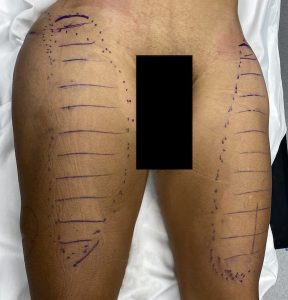 This areas is identified and marked before surgery by having the patient lean forward on each leg which will show the outline of these quad muscles orin most patients. Almost always at least the separation of the rectus femoris and the vastus lateralis will be seen in the lower half of the front of the leg. A high incision near the groin crease is marked of about 5 cms. in length. 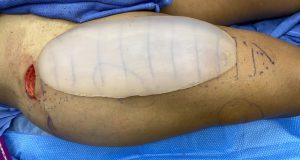 This is a long implant usually in the range of 25 to 30cms. It is far longer than its width which is in the 10 to 14cm range. Thicknesses rarely need to be more than 1 to 1.5cms although I have done as much as 3cms in thickness at its highest part. Implant volumes can range from 250cc to over 400ccs.

The subfascial pocket is done with long blunt dissectors that can reach almost to the knee. Insertion/placement of the thigh implant can seem daunting when one looks at the size of the implant compared to the incision. But rolling the implant to get it past the incision is the technique needed. Once inside the pocket various maneuvers are needed to ensure that all edges are completely unrolled and laying flat. 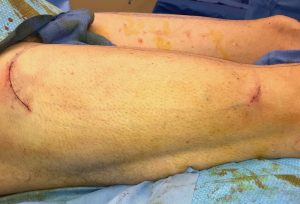 In some cases a small counter incision needs to be made low to ensure adequate inferior location of the implant or to make certain that the thinner edge of the implant is completely laying flat. This is more rare than common however.