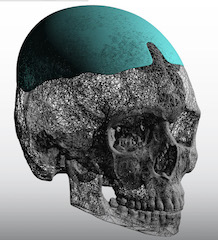 Custom skull implants are the best method for any form of aesthetic skull augmentation. Because they are designed from the patient’s 3D CT scan, they can create the best bony correction of the asymmetric skull or the best implant shape and contours of a desired skull augmentation effect. While there are multiple materials by which it can be made, a solid silicone composition offers the advantages of the most economic manufacturing cost and the ability to be placed through small scalp incisions that would seem to defy the ability to do so. This is possible because of the unique qualities that a silicone material offers.

Despite the fact that silicone devices have been around longer than any other implanted medical material with the most proven track record of biocompatibility, it is often perceived as an older and inferior material. Part of this is because it is not new and is not a contemporary ‘high tech’ material. Part of it is also because the name silicone is highly associated with breast implants. Since silicone breast implants is one of the most well known implanted medical devices (even though it is not the most common implanted silicone medical device), custom skull implants made of silicone leads patients to assume by association that it has many similar properties….which is not true.

First and foremost, silicone skull implants have a solid material composition unlike breast implants which are a gel silicone inside a silicone bag or shell. As a result, silicone breast implants will fail and need to be replaced. It is not really a question of whether they will fail by disruption of the shell but when. Conversely silicone skull implants are solid and can never fail or degrade and thus never need to be replaced. They only change their physical structure (melt) at temperatures that exceed 300 degrees C…at which point patients will have far more significant problems than whatever changes is occurring with their skull implant.

Secondly, while a silicone skull implant is solid it also can never fracture or be broken as a medical implant. Silicone is an elastomer which is best thought of as a rubber-like material. Its siloxane backbone makes it a very flexible polymer as the bond lengths are longer while the silicon-oxygen bonds are quite strong. As a result the only biomechanics feature as a skull implant that is of interest is resistance to fracture since the skull is not subject to motion. A solid silicone material offers a high resistance to breaking. (which should not be confused with a material’s hardness) The simplest way to visually it is by taking a hammer and subjecting a solid rubber block to its blows. It will not fracture but other solid materials like bone would be separated into fragments. In essence, even though its purpose is an aesthetic one, custom skull implants actually provide  a layer of protection like putting a bumper on the skull bone. 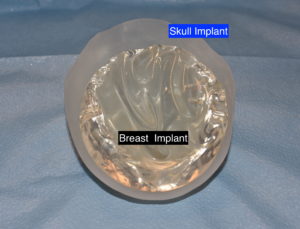