Background: The typical and most commonly illustrated picture of a skull is one with a smooth surface across the top. And while many people have such a smooth skull surface, many don’t. With hair coverage such skull surface irregularities may not be noticeable or may be known but are not an aesthetic concern.

But in the male who shaves his head every detail of the skull’s surface contour becomes visible. Indentations, high spots, and asymmetries are intimately known to the shaved head male who has them. When the depth of these contour issues are modest, the most effective smoothing approach is to cover the involved skull’s surface with a custom made implant. Using the patient’s 3D CT scan, the surface area coverage and shape of the implant to create a smooth skull surface can be designed before surgery. In many such patients the thickness of the implant is surprisingly thin to create the desired effect.

One of the important aesthetic keys to the use of a custom skull implant in an exposed scalp is limiting the length of the incision needed to place it. Thin implants are malleable which allows them to be temporarily deformed for insertion through scalp incisions that initially seem unlikely. 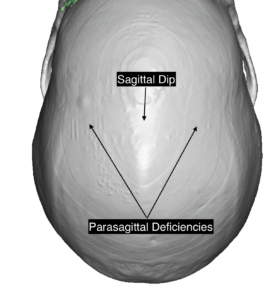 Case Study: This male presented with concerns about the shape of the top of his head that had bothered him for a long time. The sides of the top of the head (parasagittal areas) were too narrow and a dip was present across the sagittal ridge. (sagittal dip) The right paragittal area anteriorly was also more deficient than that of the left side. 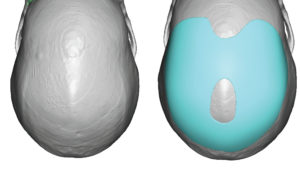 A custom skull implant was designed to augment the aforementioned deficiencies and asymmetries to create a more even convex outer shape from a frontal and side profile views. The thickness of the implant was no more than 4mms at any one area. 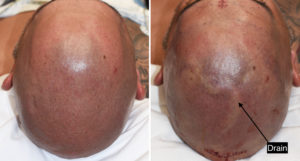 Under general anesthesia and through a curved 6cm scalp incision placed back over the posterior parietal scalp area, the custom skull implant was passed into the subperiosteal scalp pocket. It was unfolded, positioned in the midline and secured with bilateral screw fixation. The incision was then closed after placement of a drain.

Tye augmentative effect of custom implants can be limited in thickness but cover a large surface area for its effect. Being able to place it through a small scalp incision enables a major aesthetic liability effect to be avoided.

1) The smooth shaved head of the male is a very visible surface for skull irregularities and asymmetries.

2) Thin custom skull implants can be designed that help smooth out an irregular superior skull surface.

3) Such custom skull implants can be placed through very small scalp incisions that heal in a nearly imperceptible manner.